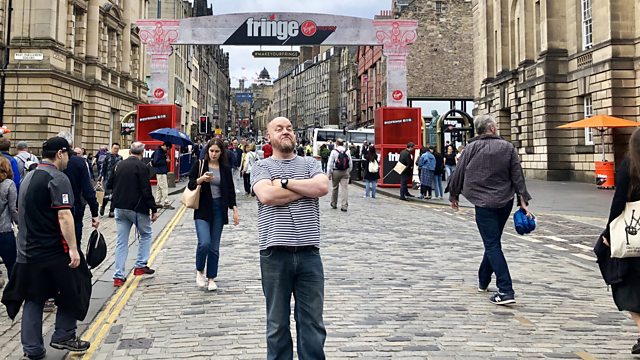 Why did the chicken cross the road? How food became more than a comedy punchline

Food has been larking about in comedy since Charlie Chaplin made bread rolls dance: but it’s steadily evolved from the slapstick sidekick to a more significant comic entertainer.

Food has been larking about in comedy since Charlie Chaplin first slipped on a banana skin and made bread rolls dance: but somewhere along the way, it's evolved from the slapstick sidekick to a much more significant comic entertainer...

From the disastrous duck at Fawlty Towers, to Fleabag’s calamitous catering efforts – via wry dinner ladies, caravan fry-ups, comedic fried chicken shops and dark food-blogger satire – food has come a long way, baby. It’s no longer a simple prop, but a much-loved theme at the very heart of modern entertainment.

In between performances at the renowned Edinburgh Festival Fringe, comedian and creative cook George Egg takes us on a journey down the Royal Mile and through the history of culinary comedy; discovering that, as with so much humour, the power of food lies in its normality. And that it’s this everyday appeal that allows food, and comedy, to conjure up safe settings in which to address much bigger issues.

I'm Alan Partridge: 'A Room with an Alan'
Created and written by Peter Baynham, Steve Coogan and Armando Iannucci; performed by Steve Coogan.

The Search for Esiah's Seeds

Jamie Oliver: A Life Through Food Part I