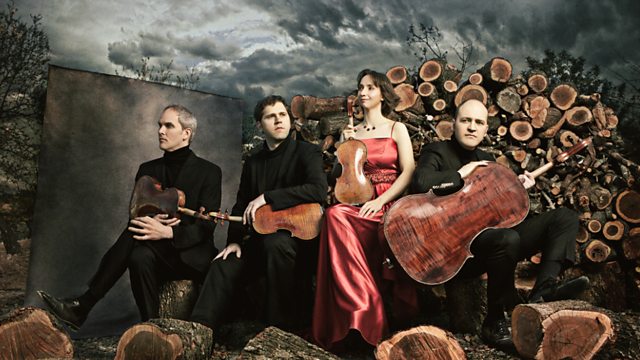 The Barcelona-based Cuarteto Casals perform three highly contrasting quartets; 'The Bird' from Haydn's set of six quartets from Opus 33 which was considered to be ground-breaking and crucial to the development of the string quartet form, written 'in a new and special way' according to the composer. Bartok's intense third quartet which makes use of extended technique to dramatic effect and end with Beethoven's expansive quartet from his 'Razumovsky' set commissioned by the Russian ambassador in Vienna at the time and performed live from the Queen's Hall. Presented by Donald Macleod

Interval at approx. 11.45am Rachel Podger starts her three concert Biber series this afternoon at the Edinburgh International Festival – The Rosary Sonatas. 15 mystical meditations on the life of Christ performed in Edinburgh’s oldest concert hall, St Cecilia’s Hall. Donald Macleod introduces Sonatas 1, 2 and 3 from her recording of the complete Rosary Sonatas for violin.