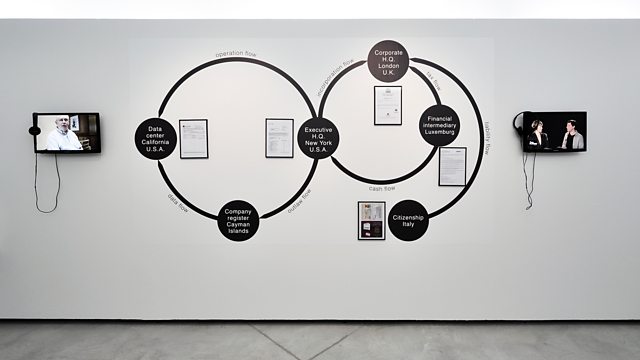 Andrew McGibbon meets the artists behind works that visualise criminal investigations and abuses of power, bringing evidence to the art gallery and holding perpetrators to account.

There's a growing movement of artists engaging in making investigative art. These artworks use evidence and forensic testing to challenge our understanding of murders, scandals, and financial skulduggery.

The artists’ work focuses on revealing how economic, political, legal, linguistic, and cultural structures can be manipulated to benefit corporations, government agencies and law enforcement departments.

Forensic Architecture is based in Goldsmiths, University of London, and is a Turner Prize shortlisted, multi-disciplinary research group. They have been investigating the notorious murder of Halit Yozgat in Kassel, Germany. Using forensic tests based on witness statements they aimed to prove that a Secret Service agent who was in the internet cafe around the time of the murder, and who claimed that he did not witness it, may have committed perjury.

Forensic Architecture’s tests attempted to prove whether or not the agent could have heard or seen the crime, or even smelt the gunpowder, presenting this evidence partly through a video at an art exhibition and later within the court case itself.

The realm of truth seeking has opened up, it is no longer solely the domain of institutions and states. Citizen journalism and the digital age has created a new army of investigators. While this can be dangerous when it adds to the proliferation of fake news, rigorously researched and clearly presented evidence is also emerging. Artists are using their skills for commanding a public through gallery spaces - translating complicated evidence, simply and in a visually arresting way, generating debates.

Can the way artists encode and present data inspire new investigative practices in detective work or journalism? Possibly - but considering works of art as evidence within a court case, however factually based they are, remains a challenge. The accused tend to use their association with the art world to delegitimise the hard facts and scientific tests they present.

Even so, this isn't always enough to prevent these complex art installations being accepted as new forms of evidence. Evidently Art shows that works of investigative art are making a real impact on the outcome of court cases, and pioneering new forms of visual evidence.