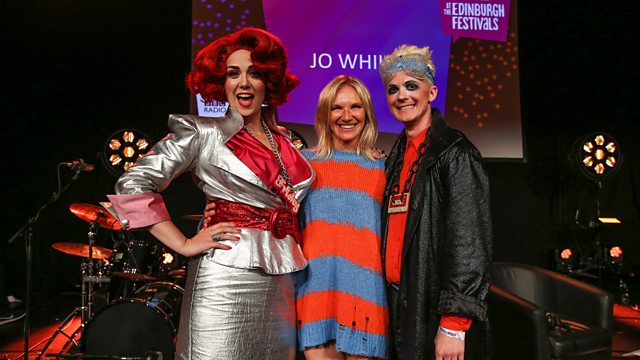 Live from the Edinburgh Festivals

Jo is live from Edinburgh with special guests and live performers joining her on stage - including Frank Skinner, Rose Matafeo, Frisky & Mannish and Russell Howard.

Jo is live from Edinburgh with special guests and live performers from the city's festivals joining her on stage at the BBC Blue Tent.

Jo will be joined by comedians Frank Skinner, Russell Howard, Rose Matafeo, Phil Wang and Lucy Porter. Plus there will be live performances from Cora Bissitt and the cast of What Girls Are Made Of, the cast of Friendsical - the parody musical inspired by the TV show Friends and cabaret duo Frisky & Mannish.

Comedy legend Frank Skinner will be in Edinburgh performing his new Frank Skinner Live show before heading out on his Showbiz tour in the autumn. In 1991 his Edinburgh show won comedy's most prestigious prize, The Perrier Award.

Russell Howard will also be in Edinburgh ahead of his upcoming World Tour, performing in twenty-four countries over five continents. As well as his stand-up he's best known for his TV shows including Russell Howard's Good News, The Russell Howard Hour and Russell Howard & Mum: Globetrotters.

New Zealand comedian Rose Matafeo won last year's Edinburgh Best Comedy Show Award with her show Horndog - only the fifth woman to take the title. She's bringing the show back to Edinburgh for a limited run as well as performing as part of the improv group Snort.

Phil Wang's sold-out 2019 Edinburgh show Philly Philly Wang Wang follows his acclaimed 2017 show Kinabalu. He starred in seventh series of Taskmaster and is regularly on TV on shows such as Live At The Apollo and Have I Got News For You.

Lucy Porter is bringing a new show, Be Prepared, to the Edinburgh fringe having already been on the road this year with her show Pass It On. She's been doing stand-up for over ten year and is regularly on TV and radio in such shows as Mock The Week and The Now Show.

What Girls Are Made Of is a semi-autobiographical musical show written by and starring Cora Bissitt and performed with a live band. It is based on her teenage diaries from the nineties, during which time her band Darlingheart experienced the highs and lows of the music industry.

Friendsical is a new parody musical inspired by the iconic TV show Friends, marking the show's 25th anniversary. After the Fringe it will embark on a UK tour into the autumn.

Critically acclaimed cabaret duo Frisky & Mannish are back in Edinburgh with Pop Lab, their first new show since 2014. In the show the pair invite you to their Pop Lab to peek down the microscope at all their latest research projects - such as asking who is the latest to benefit from their 80s RnB Conservation Program? Premiering in Edinburgh, the duo then take the show on a UK tour.

Every year during the month of August the city of Edinburgh becomes home to several cultural festivals - including the Edinburgh Art Festival, the Edinburgh International Festival and the Edinburgh Festival Fringe - which itself is the world's largest arts festival with an expected 55,000 performances in over 300 venues.