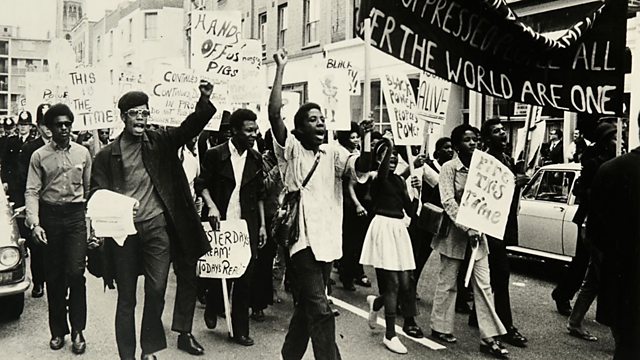 Inspired by the American Black Panther Party, the British Black Panthers were founded in London’s Notting Hill in 1968 – the first Panther organisation outside the United States. Their mission was to change the terms of engagement about race in Britain, promote self-determination and challenge the British state.

Writer Kehinde Andrews, who launched the first UK Black Studies degree in Birmingham, meets key former Panthers and the generations that followed them, and – hearing from critics, artists and historians, drawing on a wealth of archive – explores their legacy.

From the late 1960s, following Enoch Powell’s Rivers of Blood speech, and throughout the early 1970s, the British Black Panthers drew on the example of their American counterparts. The politics of Black Power travelled across the Atlantic and took unique form on British soil, inspiring a generation of multi-racial Black British youth. Putting aside revolutionary rhetoric, the British Panthers focused on policing the police at street level and on educating their members in Saturday schools. They championed racial equality - better housing, legal aid, immigrants’ rights and non-racist employment practice. They took on the criminal justice system and won. They agitated, argued, demonstrated, printed a weekly paper and marched under the flag of the same logo as their American counterparts - the leaping Panther.

Special Branch responded to the movement with its own Black Power Desk, while the 1970 trial of the Mangrove Nine, following a clash between police and Black Panther demonstrators in Notting Hill, evoked Magna Carter and changed racial justice in Britain forever.

Members included Darcus Howe, Altheia Jones-LeCointe, Farroukh Dhondy, the photographer Neil Kenclock and dub poet Linton Kwesi Johnson. The movement was inclusive, embracing members from Asian as well as West Indian and African descent. The Panthers were the new, multi-racial Black youth of Britain - children of immigrants, educated in British schools and more radical and defiant than their parents.

The Upside of Anxiety