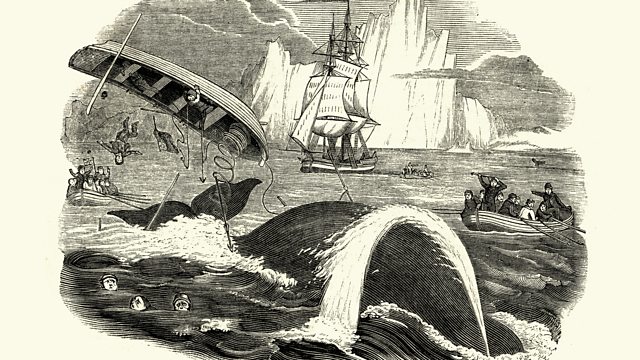 Herman Melville and Moby Dick, Luddite rebellion on stage, TV's I Am the Night

Moby Dick - is it the great American novel? Plus a new Manchester play about the Luddites, and Wonder Woman director Patty Jenkins' TV drama I Am the Night reviewed.

This week sees the 200th anniversary of the birth of Herman Melville, writer of one of America's greatest novels, Moby Dick. Sarah Churchwell and Richard King discuss the extraordinary tale of Captain Ahab's pursuit of the white sperm whale that had bitten off his leg. The story of Ahab's revenge is famously narrated by Ishmael, who is on his first whaling expedition, with one of literature's most celebrated opening lines : Call me Ishmael.

Wonder Woman director Patty Jenkins is reunited with Chris Pine in new TV drama I Am the Night. Set in 1950s America it follows the true story of Fauna Hodel, a young woman in search of her biological family after discovering she’s adopted and not mixed race as she’d been told, but white. Both Fauna, and a down-and-out reporter played by Pine, end up on the trail of famous gynaecologist, Dr. George Hodel who's somehow connected to the gruesome Black Dahlia murder.

Is there something to be said for Luddism? The machine-wrecking rebels of the Industrial Revolution are the subject of a new play There is a Light that Never Goes Out: Scenes from the Luddite Rebellion at the Manchester Royal Exchange. Rather than casting The Luddites as history's losers, fighting a doomed battle against the march of progress, it asks whether they were in fact pioneers who paved the way for workers' rights and the welfare state. The creative team James Yeatman and and Lauren Mooney take us through the historic parallels which suggests we too might consider resisting the rise of the machines.

I Am the Night

There Is A Light That Never Goes Out

There is a Light That Never Goes Out: Scenes from the Luddite Rebellion