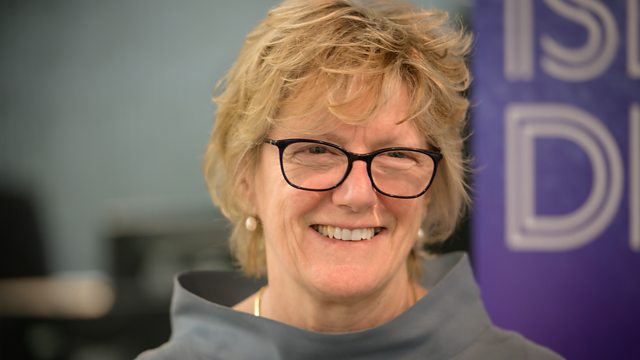 Dame Sally Davies, chief medical officer of England, shares the eight tracks, book and luxury she would want to take with her to a desert island. With Lauren Laverne.

Dame Sally Davies is the outgoing Chief Medical Officer for England. She will take up her next post as Master of Trinity College, Cambridge, later this year.

She was born in Birmingham in 1949 to academic parents - her father was an Anglican priest and theologian, her mother a scientist. She studied medicine at Manchester University and after two 'brutalising' years spent learning the job on the wards, she welcomed the opportunity to move to Madrid as a diplomat’s wife. However, she decided that she did not enjoy being - in her words - 'an appendage', and so she returned to medicine in the UK, starting in paediatrics and then moving to haematology, specialising in Sickle Cell Disease. Her first marriage didn’t last and her second ended in tragedy when her husband died of leukaemia within months of the wedding.

After joining her first research scheme committee in the late 1980s, Sally widened her remit. She became Chief Scientific Adviser to the Health Secretary and, in 2011, Chief Medical Officer for England. Her achievements include creating the National Institute for Health Research, a body to oversee the funding of research in the NHS, and working tirelessly to raise awareness of the dangers of anti-microbial resistance.

Sally holds 24 honorary degrees and is about to return to academia, taking up her post as the first woman Master of Trinity College in October 2019. She is married to Willem with whom she has two grown-up daughters.

BOOK CHOICE: On Food and Cooking: The Science and Lore of the Kitchen by Harold McGee
LUXURY ITEM: Bubble bath
CASTAWAY'S FAVOURITE: The Trumpet Shall Sound, from Handel's Messiah