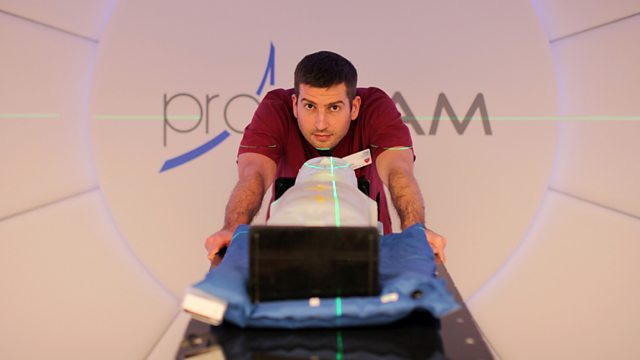 Following the NHS as they start to implement proton beam therapy, an advanced but expensive cancer treatment, as well as following as the first children awaiting the lifesaving treatment.

Proton beam therapy is the one of the most technologically advanced though expensive cancer treatments in the world - but it has the potential to save the lives of children with otherwise incurable cancers.

Over two years, Horizon follows the engineers, scientists and medics as they race to build two new centres, one at the Christie Hospital in Manchester and one at University College Hospital in London, as well as following as the first children awaiting the lifesaving treatment. This is one of the most complex challenges the NHS has ever attempted.

At the cutting edge of particle physics, proton beam therapy involves splitting hydrogen atoms to create a beam of protons travelling at two-thirds the speed of light, which target tumours with millimetre precision. But doing this in the heart of two of our biggest cities is no easy feat. The process generates so much radiation it needs to be housed in a maze-like nuclear bunker, with walls four metres thick. 2,000 tonnes of precision instruments are installed - more than four jumbo jets worth - and it all has to work perfectly.

This special BBC Two programme goes behind the scenes on the £250 million cancer cure - from digging the biggest, widest hole ever to exist
in London to the treatment of the first patients in the UK.