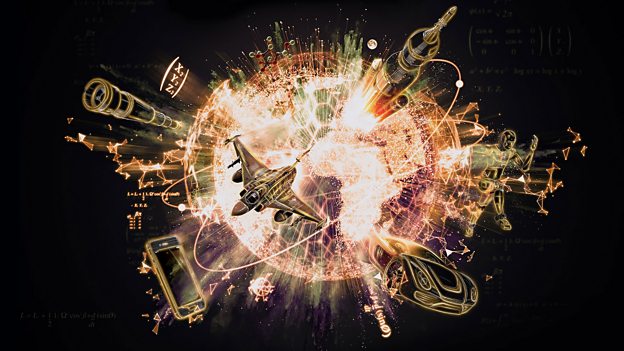 Revolutions: The Ideas that Changed the World

‘It takes more than one mind to change the world’ - Jim Al-Khalili
In this major new landmark series for BBC Four co-produced by PBS, Jim Al-Khalili explores the extraordinary story of six remarkable inventions: The Aeroplane, The Car, The Rocket, The Smartphone, The Telescope, The Robot. They are familiar, yet hidden within them are thousands of years of thought, struggle, sacrifice, determination and insight.

The series is littered with visionaries. We peer into their original notebooks and sketches, use state of the art experiments, ground breaking drama and CGI to shed new light on the discoveries of well-known icons, like Galilei Galileo and Leonardo Da Vinci; lesser known individuals like female pioneers, Ada Lovelace and Bertha Benz; many, like the medieval scholar, Ibn al-Haytham, most viewers will have never heard of.

Each episode explores little-known stories and is packed with incredible ideas: Like the beginnings of robotics 2,000 years ago or the Hollywood
starlet and inventor who, while trying to defeat the Nazis, made today’s mobile network possible. We see time and again where a completely
chance discovery leads to an application that no-one was expecting.
The result is a mind-blowing science-led journey through human history, full of unintended consequences and incredible connections. It reveals how science, invention and technology build on one another to change everything. Mostly, it celebrates the achievements of the some of the greatest minds in human history.