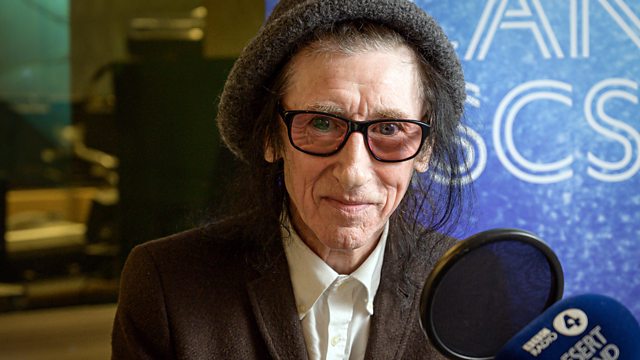 John Cooper Clarke, poet, shares the eight tracks, book and luxury he would want with him if cast away to a desert island. With Lauren Laverne.

John Cooper Clarke first achieved fame with his poetry during the punk rock era of the late 1970s. Born in Salford in 1949 to Hilda and George, he suffered from tuberculosis as a child and was sent to recuperate with a relative in Wales. He failed his 11 plus exam and was educated at a secondary modern school which he hated. However the one “rose in a garden of weeds” was his English teacher, Mr Malone, who instilled a love of poetry in John and his classmates.

John had various odd jobs after leaving school at 15 and by his mid-20s, he was reciting his poetry in clubs around Manchester. His entry into the punk scene was helped, he says, by “already looking like a punk”, and despite some initially hostile receptions from audiences waiting for the Sex Pistols or the Buzzcocks, he acquired a cult status, going on to release five albums of his poetry set to music by former Joy Division producer Martin Hannett.

By early 1980s, he was also in the grip of a heroin addiction which would see him write very little for over a decade. He cleaned up in the early 90s after marrying his second wife, Evie, and having a daughter, Stella. His star began to rise again in 2007 when one of his poems was used in an episode of The Sopranos and others were included on the GCSE syllabus, which led to collaborations with artists like Plan B and Alex Turner of the Arctic Monkeys.

BOOK CHOICE: Against Nature by Joris-Karl Huysmans
LUXURY ITEM: A boulder of opium twice the size of his head
CASTAWAY'S FAVOURITE: How Great Thou Art by Elvis Presley