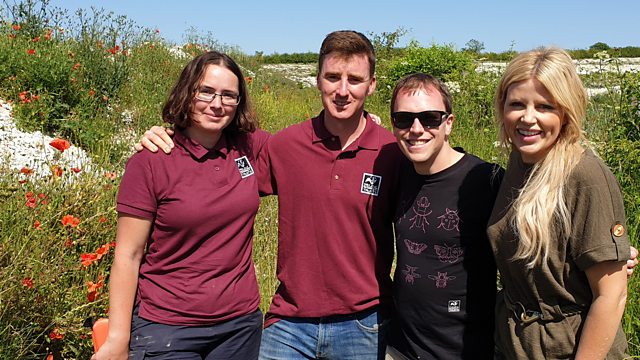 In Bedfordshire, Ellie Harrison is on the Totternhoe nature reserve, hearing how tiny temperature loggers could help some of our rarest species combat the effects of climate change.

John Craven visits the secluded estate of Luton Hoo, where the walled garden and the estate’s farmland have played an important role throughout the years. Both were used as training grounds for land girls, and John meets Zeita Holes, who trained as a dairy maid there.

Matt Baker spends the day on the Franklin family farm. It started life as a poultry farm and has been passed down through six generations. But over the years, the family have diversified to keep up with changing market demands, and their focus now is on producing slow-grown, 100% traceable food. They also supply their meat to another producer in the area making something that Bedfordshire only wishes had the same fame as its Cornish counterpart – the Bedfordshire Clanger!

Adam Henson visits his Suffolk Punch, Lexie. She has been in stud for the last few months and Adam is hoping for some good news.

It is said we are seeing a new dawn in environmental campaigning – where established power structures are being turned on their head. Tom Heap asks if the old way of working – where top-down policy-making is enforced and monitored by bureaucratic bodies hamstrung by red tape and a lack of resources – has had its day.

The eastern counties of England are known for their arable farming. But the rich soils aren’t only perfect for growing all sorts of crops - they also nurture some very rare plants, as Margherita Taylor discovers, just over the border in Lincolnshire, where she learns all about the rare tall thrift.