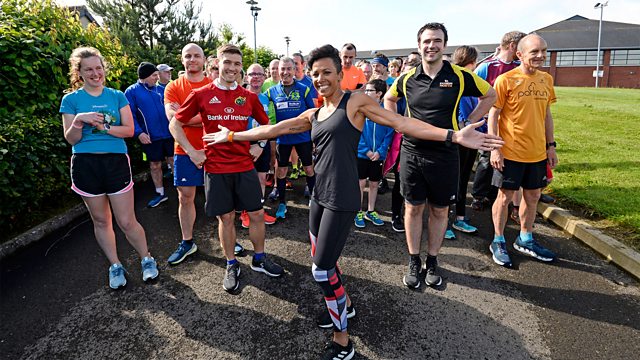 Dame Kelly: The Power of Parkrun - Our Lives

Dame Kelly Holmes explores the rise of parkrun and the mental health benefits of running, in the build-up to the launch of a new run in Northern Ireland.

In this uplifting True North documentary, Dame Kelly Holmes explores the rise of parkrun and the mental health benefits of running, in the build-up to the launch of a new run in Northern Ireland.

Over the last 14 years, the parkrun phenomenon has transformed Saturday mornings around the world. What started out in London as a simple idea to get mates together for a time trial and a coffee has turned into something much, much bigger. Today, parkrun is one of the largest running events on the planet, pulling in more than 235,000 participants around the globe every weekend. Although it started out as a runners’ event, these days it is about improving health and well-being, inspiring people to take exercise, meet neighbours and volunteer. The organisation is now actively targeting areas of social deprivation in the UK, with its focus shifting toward how running can help transform our mental well-being.

This film follows the launch of a new event in one of those areas – Strabane in Northern Ireland - and is presented by one of the UK’s most successful athletes, two-time Olympic gold winner Dame Kelly Holmes, whose passion for parkrun sees her make unannounced appearances at runs all over the UK. Dame Kelly reveals that away from the track she has struggled with mental health issues from a young age, including self-harm, anxiety and depression following the death of her mother two years ago. She uses her own personal experiences to help inspire and coach two people using the new run to kick-start their fitness journey. With five weeks to prepare for the event, will they join the running revolution?

See all clips from Dame Kelly: The Power of Parkrun - Our Lives (2)