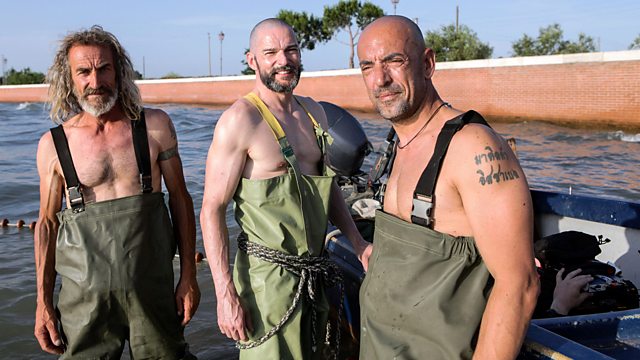 Fred Sirieix is heading to Venice in the company of chef-restaurateur Angela Harnett, whose Italian family heritage has given her a lifelong love of Italian food. Her Michelin-starred restaurant Murano is named after one of the Islands in the Venetian lagoon.

Heading across the lagoon in an elegant water taxi, Fred can’t help but feel the allure and glamour of the city, but to him Venice is a destination better suited to romance than it is to food. However Angela insists that if you know the city as well as she does, you can avoid over-priced tourist traps and find some unforgettable food experiences.

The first place in her little black book, and her all-time favourite place to eat in Venice, is Osteria Alle Testiere, a tiny restaurant in the south east district of Castello. Alle Testiere was opened 20 years ago by friends Luca de Vita and Bruno Gavangnin and seats just 22 diners in a space of only 35m2. Chef Bruno changes his menu every single day, offering local fish and seafood from the lagoon in the fresh and light style traditional of Venetian cuisine. Fred is delighted by the subtle flavours of Bruno’s food, and the wonderful front of house service provided by Luca. From the tiny pilgrim scallops with mint and lemon with which they start to the house speciality of artichoke and ricotta ravioli served with local langoustine and prawns, every course is simple, delicious and beautifully presented. Fred wants to know how they can create such unforgettable meals in such a tiny kitchen, while Angela wants to understand how Luca and Bruno overcome the challenges that the city itself puts in their way.

The next morning Fred and Angela are up early to meet Luca and Bruno at Venice’s Rialto fish market, next to the Grand Canal. There is a huge range of produce on offer, but chef Bruno will only buy fish and seafood that has been caught in the lagoon and he is very selective - rejecting anything but the best and freshest. Bruno only decides what is on the menu after he has bought his daily supplies and experimented in the kitchen to work out the perfect way to serve that day’s catch, leaving Luca with just an hour to rewrite the menu before the lunchtime customers arrive.

Angela also wants Fred to experience Caffè Florian in St Mark’s Square, founded in 1720 and one of the oldest cafes in Europe, a place that has turned table service into an art form. Florian’s ornate interior and terrace with views of the Duomo and the square can house 400 customers at a time. Here Fred and Angela order coffees and treat themselves to ice creams and Florian’s signature semifreddo tiramisu. Angela thinks the desserts are excellent, and although pricey, made from the best ingredients. Add the view of St Mark’s and it is well worth splashing out, but for Fred it is not the food that really stand out, it is the waiters.

The impeccably dressed waiters serve every order on a silver tray that is expertly twisted as it is placed on the table so that each drink or pastry lands exactly in front of the person who ordered it. Fred wants to try his hand at this kind of table service and is shocked to discover how heavy the trays are and how incredibly difficult it is to make service look so effortless. Angela is surprised to learn that the historic building that houses the cafe doesn’t contain a kitchen - instead the cakes, pastries and ice-creams are made ten minutes walk away. The completed trays of cakes have to be carried over bridges, through tourist packed streets and across St Mark’s square. It is exhausting and leaves Angela with even greater respect for the dedication of the Florian team.

The historic centre of Venice measures less than 12 square kilometres and nothing is grown there – so all the food served in every restaurant has to be brought in by boat and then by cart or by hand. Fred joins Thomas, who supplies fresh fruit and vegetables to Alle Testiere on the barge that brings his supplies into the city. It takes four hours to load the barge, reach Venice, unload the barge and transport the fruit and veg boxes to the market stall just outside the restaurant. A huge effort that leaves Fred more impressed than ever that Bruno and Luca never compromise on quality in anything they offer at Alle Testiere.

The final place that Angela wants Fred to experience is a family run restaurant on the fisherman’s island, Burano. Chef Ruggero took over the Gatto Nero in 1965 and his son Massimiliano is in charge of front of house. Ruggero’s signature dish is a simple risotto, but Angela believes it is the best risotto she has ever tasted. Fred joins Massimiliano on a fishing trip to catch the bony go fish that flavours the stock at the heart of the dish. To Angela, Gatto Nero sums up so much of what she loves about Italian food – a family atmosphere and a complete dedication to traditional ingredients. And, like Alle Testiere and Caffe Florian it is a place that you will never forget.

See all episodes from Remarkable Places to Eat

Five stand out food experiences from Remarkable Places to Eat 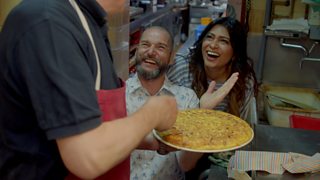