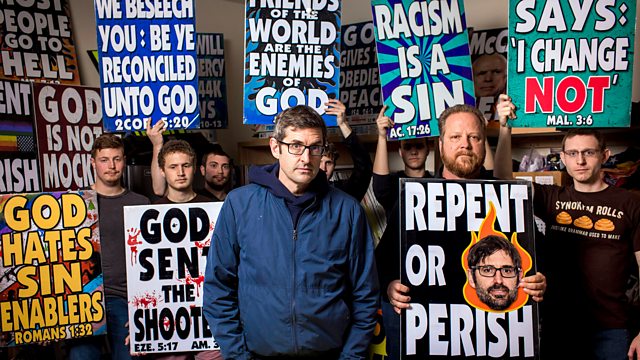 Louis Theroux returns to visit the controversial Westboro Baptist Church, investigating what effect the death of its founder has had on its members and those who have since left.

Thirteen years since first encountering one of America’s most notorious hate groups, award-winning film-maker Louis Theroux makes a long-anticipated return to Kansas to spend time with the Westboro Baptist Church - a hugely-controversial Christian ministry that for years has picketed at military funerals and other high-profile events with deliberately provocative and homophobic placards.

In 2006 and again in 2011, Louis uncovered a world of indoctrination masterminded by church-founder and figurehead Pastor Fred Phelps, known amongst his congregation as Gramps. But since his death in 2014, the church has experienced a significant change that has threatened to tear apart what was once a tight-knit family community and challenged their relevance in Trump’s America, where outrageous statements are par for the course. As well as a series of allegations about Pastor Phelps’s final days, including rumours of mental illness and his excommunication, the church has also been hit by a number of high-profile family defections, including Pastor Phelps's granddaughter Megan, now Westboro’s most prominent critic. Yet despite the unrest, the church has continued to attract new members, including Bradford-born Mathias Holroyd, who sees Westboro’s fire-and-brimstone rhetoric as the perfect tonic to his struggle to fit in with modern-day Britain.

Immersing himself in the strange and unpleasant world of Westboro, Louis explores what happens when a hate-group largely populated by one family loses its patriarch. And, as he discovers, Pastor Phelps’s doctrine of divine hate has cast a shadow not only on the church's true-believers but also on those who have managed to escape Westboro's vice-like grip.

Mothers on the Edge

See all clips from Surviving America's Most Hated Family (3)