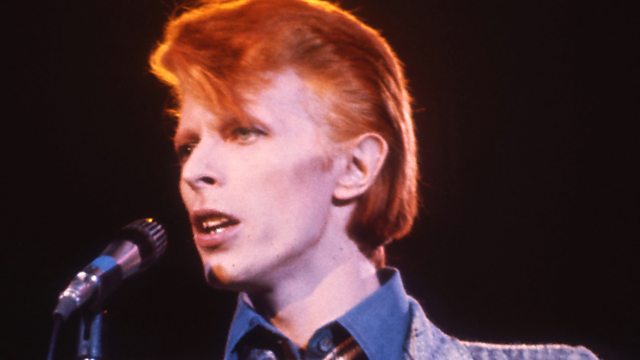 July 2019 is the 50th anniversary not only of the Apollo moon landing but of the original release of David Bowie's 'Space Oddity' single, which was his first ever hit.

July 2019 is the 50th anniversary not only of the Apollo moon landing but of the original release of David Bowie's 'Space Oddity' single, which was his first ever hit. 'One Giant Step' examines the origins and legacy of 'Space Oddity' - arguably Bowie's best known song, and its importance as a shadowy presence throughout his whole career cannot be underestimated. With new interviews from those who were there - including musicians, record company personnel and friends - as well as archive and unbroadcast interviews with David and producer Gus Dudgeon - we track 'Major Tom' from 'Space Oddity', through 'Ashes to Ashes' 'Hello Spaceboy' to 'Blackstar' with unheard studio outtakes and live performances. Contributors include: Pet Shop Boys, Dana Gillespie, Kevin Cann, and Olav Wyper.
We look at why on the back of 9 flop singles and many unreleased attempts at fame - Space Oddity was written, and examine the influences with new interviews with his duet partner of the time John Hutchinson and an ex girlfriend Dana Gillespie. We hear in full, exclusively to this programme, for the very first time, the earliest known demo of Space Oddity - performed as a duo with Hutch, but with different lyrics and arrangements. We have previously unheard archive interview of Bowie’s manager at the time, Ken Pitt, talking about the unshown TV special 'Love You Till Tuesday' for which the song was written and we hear a previously unheard studio outtake of the song from February 1969. We hear about his multi-media trio Feathers - which was the starting point for the song - plus other influences such as Kubrick’s 2001 A Space Odyssey. We learn how Bowie admits that 'Gee I am Major Tom' and how the creation of the Major Tom character would be the first of many in his career. We reveal how Tony Visconti hated the song - so gave it to Gus Dudgeon to record, and how Elton John was so blown away by Space Oddity that he just had to have Gus Dudgeon as his producer. Bassist Herbie Flowers who played on the track tells us about the original session plus playing the song with David on his 1974 tour. We also hear from Philips Records executive Olav Wyper on how he helped make the record - against all odds - a hit. We hear how David won an Ivor Novello award for best original song. We discover how David Bowie’s first UK number one single was a re-issue of Space Oddity in 1975 and hear the 1979 Lennonesque remake. We hear from video director David Mallet - who made the startling video for Space Oddity 1979 which presaged the award winning video for Ashes To Ashes the song of course prominently features 'Major Tom' who is now a junky…. We have exclusive archive of Bowie talking about Ashes to Ashes and the continuing story of Major Tom. We also explore other versions of the song, including a reggae version by Rudy Grant and hear German singer Peter Schilling who had a worldwide hit with the song ‘Major Tom’ in 1982. In a brand new interview Pet Shop Boy Neil Tennant tells us how PSBs came to remix ‘Hello Spaceboy’ - and how it was his idea to 'cut up' the original Space Oddity lyrics and sing them with Bowie on the hit.
We also hear some rare audio of the very last time Bowie performed the song in 2002 in Denmark. Space Oddity has by now become such a part of popular culture that it was no surprise when Chris Hadfield performed Space Oddity live from the Space Station. And in an exclusive interview superstar film director Johan Renck tells us about the creative process of working with Bowie on the Blackstar video - the video that sees Major Tom finally laid to rest, made only months before Bowie’s untimely death. The programme is presented by Tris Penna, who as a record executive and producer knew and worked with David Bowie.