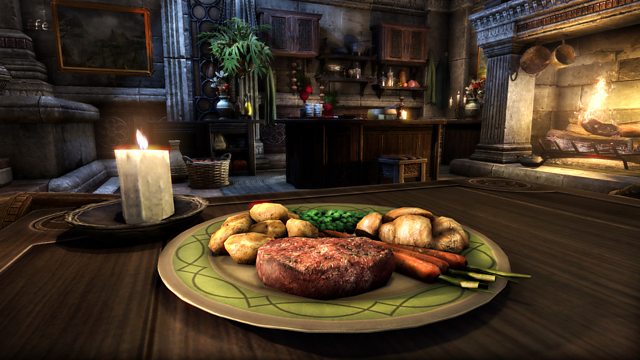 Playing with Food: The world of video game gastronomy

From Skyrim to Overcooked and Final Fantasy to Fallout 4, Dan Saladino embarks on an quest to find out what we can learn about food, from playing video games.

Dan Saladino embarks on an epic quest into a world of food-filled computer games, to find out how and why foraging, cooking and eating have become such important components of the genre.

Food has taken on a major role in many modern games - not only in terms of beautiful, Instagram-worthy designs bringing dishes to life on screen, but also food-related quests and story-lines - and even game-based recipe books inspiring players to cook their favourite on-screen meals. And even if you don't play these games yourself, the technology behind such virtual vittles could have a significant impact on how and what we eat in future.

In between battling monsters in huge open-world fantasy adventures such as Elder Scrolls Online, and trying to beat the clock in the cooperative kitchen-based stress-fest Overcooked 2, Dan speaks to games enthusiasts and developers to find out more.

He even finds time to do a little game-inspired cooking himself...

Can Anyone Learn To Cook? - A Life Through Food with Samin Nosrat

Is There A Perfect Diet Just For You? The Future of Personalised Nutrition