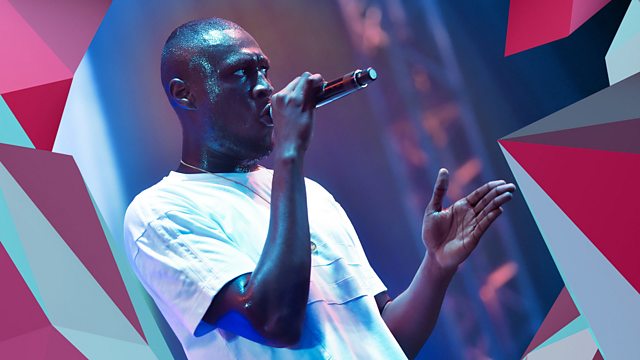 Settle down for a magic carpet ride around Worthy Farm hosted by Jo Whiley, Huw Stephens and Clara Amfo, as Glastonbury Festival hits its stride with live coverage of Friday night’s headlining set from the inimitable Stormzy.

Hot on the heels of this year’s ‘Vossi Bop’ and its follow up new track which is about to storm the singles chart, Michael Ebenazer Kwadjo Omari Owuo Jr from South Norwood storms the Pyramid Stage shortly before his 26th birthday. The first black British solo artist to headline the festival, the Wicked Skengman has been racking up the firsts since he debuted on Later… with Jools Holland and won his first Mobo in the same week back in 2014. Expect all the big songs from the 2017 debut album Gang Signs & Prayer, perhaps the odd collaboration – Jorja Smith, Nadia Rose, perhaps even his old mucker Ed Sheeran – or maybe this will simply be Stormzy the warrior out there on his own proving once again that his flow, his intensity and his cheeky vulnerability make him grime’s first superstar. There is only one way to find out.

Following Stormzy’s set Mark Radcliffe and Edith Bowman take over from Huw and Clara and catch up on the John Peel, Park and West Holts stages with headline sets from the likes of Interpol, Jon Hopkins and Cat Power, while James Ballardie introduces Pangea, the mighty evolution of dance stage Arcadia from its former spider incarnation to whole new heights courtesy of a giant crane. Throw in highlights from the rest of the day and the odd stripped-down performance and this is Glastonbury live and direct in your own home.