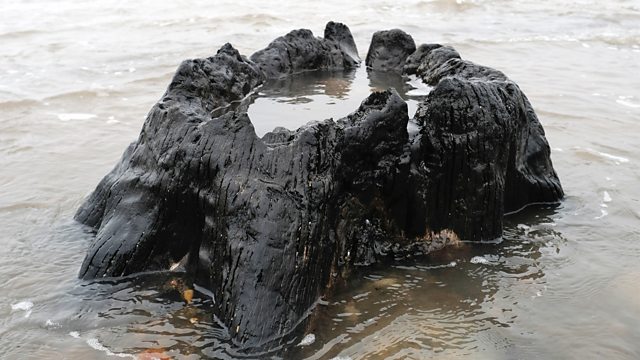 Melvyn Bragg and guests discuss the growing understanding of the humans, plants and animals once living on land now under the North Sea, submerged in the Stone Age.

Melvyn Bragg and guests discuss the people, plants and animals once living on land now under the North Sea, now called Doggerland after Dogger Bank, inhabited up to c7000BC or roughly 3000 years before the beginnings of Stonehenge. There are traces of this landscape at low tide, such as the tree stumps at Redcar (above); yet more is being learned from diving and seismic surveys which are building a picture of an ideal environment for humans to hunt and gather, with rivers and wooded hills. Rising seas submerged this land as glaciers melted, and the people and animals who lived there moved to higher ground, with the coasts of modern-day Britain on one side and Denmark, Germany, The Netherlands, Belgium and France on the other.

Rachel Bynoe
Lecturer in Archaeology at the University of Southampton

Vincent Gaffney at the University of Bradford

Rachel Bynoe at the University of Southampton

Submerged Prehistoric Archaeology and Landscapes of the Continental Shelf (SPLASHCOS)

From the Field: Rachel Bynoe, Happisburgh – The Leakey Foundation

Of mammoths and other monsters: historic approaches to the submerged Palaeolithic - Antiquity, 2016

A Middle Palaeolithic site in the southern North Sea: Investigating the archaeology and palaeogeography of Area 240 - Journal of Quaternary Science, 2014

Geoffrey Bailey, Jan Harff and Dimitris Sakellariou, (eds.), Under the Sea: Archaeology and Palaeolandscapes of the Continental Shelf (Springer International, 2017)