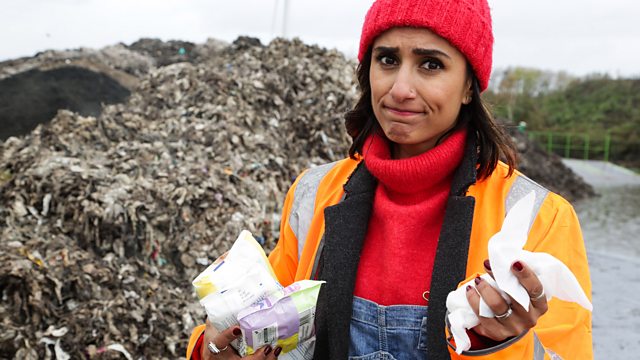 Hugh and Anita's attempts to solve our plastic problems continue. Anita tackles bathroom plastics whilst Hugh learns that microplastics are in the air.

On the street in Bristol, where they have challenged the residents to go plastic-free, the attention shifts to the bathroom. Shampoos, toothpaste, make-up, shower gels: our bathroom products almost always come in plastic. But when Anita takes the residents to the local sewage works, they get a very graphic (and smelly) introduction to another problem: wet wipes. We use 11 billion wet wipes in the UK each year, up 30% since 2014. Millions are flushed down loos incorrectly and end up contributing to the vast fatburgs that clog up our sewers. The residents are most shocked, however, to discover that 90% of wet wipes contain plastic. Anita wonders why the major manufacturers fail to make it clear on their labels, and she comes up with a spectacular way to try to get answers.

Meanwhile Hugh is continuing to investigate what happens to our recycling once it leaves our homes. He wants to know why so much British plastic waste is ending up rotting on illegal dump sites in Malaysia. He presents his findings to a local council whose bags he found on the site, and to the Minister for the Environment, Michael Gove. Gove is appalled by what Hugh shows him, but will his strong words lead to action and real change?

Hugh then travels to Plymouth University to find out about the prevalence of microfibres in the natural environment. Microscopic plastic particles have already been found in the deepest ocean trenches, the highest mountain ranges, and in ice-core samples in the Arctic. With mounting concern about what they could be doing to our health, Hugh learns that one major source is our synthetic clothes. After discovering that microfibres are now being found in the air as well as in our water, he gets the street’s residents involved in an experiment that suggests we could even be breathing them in.

See all episodes from War on Plastic with Hugh and Anita