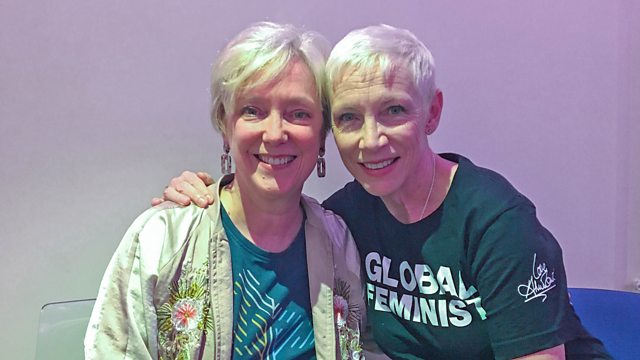 Phill Jupitus talks about exhibiting his artwork in Cupar, and Paul English talks to Fran Healy ahead of the 20th anniversary re-release of The Man Who album.

Annie Lennox is in conversation with Janice Forsyth following her Ted X talk in Glasgow on Friday.

We hear about St. Magnus International Festival in Orkney from its Artistic Director Alasdair Nicolson.

Fran Healy talks to Paul English about the 20th anniversary re-release of The Man Who album and the first ever release of the recording of Travis’s 1999 Glastonbury performance.

Janice’s Single of the Week is Scapa Flow 1919 by Kris Drever. He joins her live from Shetland.

Catrina Rose gives us a flavour of this year’s Borders Book Festival as she catches up with authors shortlisted for the Walter Scott prize, and actor Jack Lowden, who will be reading extracts from each of the nominated stories.

Captain Corelli's Mandolin, Catch-22, and the man who shaped Britpop