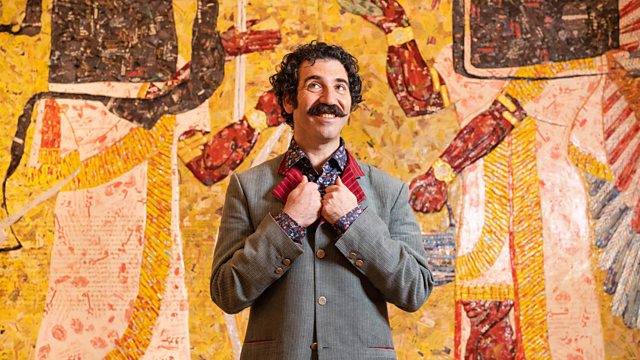 Eleanor Rosamund Barraclough hears how art should also be political from American sculptor Michael Rakowitz, how stories travel, and how to bring the past into the present.

The American sculptor Michael Rakowitz on how his own Iraqi heritage drove him to make art about the disappearance of artefacts and people. From shame to sympathy - New Generation Thinker Emily Cock looks at the way the British State used facial disfigurement to mark criminals for life. Nicholas Jubber has travelled Europe from Iceland to Turkey exploring the popularity of ancient epic tales - and ahead of the British Academy's summer showcase, we hear from Turkey about new ways of involving local villages in the cultural heritage around them.....and how a conversation between primatologists and archaeologists are refining the story of how stone tool use developed.

New Generation Thinkers is a scheme run by the BBC and the AHRC to select ten academics each year who can turn their research into radio.
Image: Michael Rakowitz (portrait) with The invisible enemy should not exist (Northwest palace of Nimrud, Room N) 2018 (Photo John Nguyen/PA Wire, Courtesy Whitechapel Gallery)

You can hear a discussion of The Odyssey with Amit Chaudhuri, Karen McCarthy Woolf, Daniel Mendelsohn and Emily Wilson https://www.bbc.co.uk/programmes/b09kqjc0