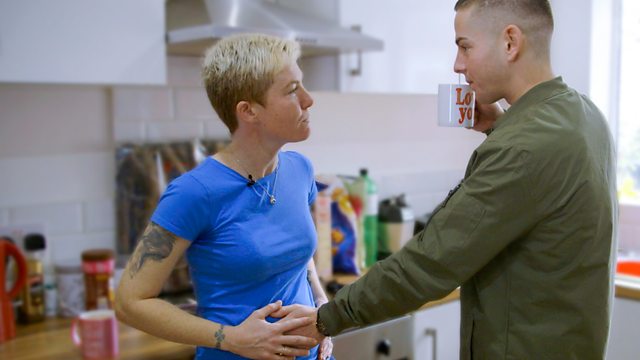 Documentary looking at the growing phenomenon of co-parenting – where women and men have a baby together without being in a romantic relationship.

Documentary looking at the growing phenomenon of co-parenting – where women and men have a baby together without being in a romantic relationship. Many are friends, while others meet through co-parenting websites. They all have one thing in common – a very strong desire to have a child of their own.

Friends Alex and Miriam are both in their 20s, both gay and both want to be parents – so why not have a child together? Their efforts are complicated by the fact that Alex lives in Birmingham and Miriam is in London. “Alex got me a turkey baster for Xmas as a joke present," says Miriam. They synchronise diaries and fertility apps to ensure that they meet on peak fertility days. But it doesn’t always go to plan.

Desirée, a postal worker from Liverpool, met Jamie through a co-parenting website and now they are thrilled to be expecting a baby. It is not all plain sailing though. Jamie’s mother has revealed that there is muscular dystrophy in the family and he needs to be tested – there is an agonizing eight week wait for the results. Now they must make essential arrangements on how they are going to share their baby. Can their trip to a mediator help them get their all-important co-parenting agreement in place?

Richard is gay and knew when he turned 30 that he definitely wanted a child of his own. Now he is 35 and even more determined to find a co-parent. He visits a co-parenting meeting and is delighted to discover that he is not the only one that feels this way.

Saschan has had serious fertility issues due to complications with her contraception. She was told that if she wants a baby of her own she should to get pregnant before she is 27 – and she is 26 now. At a co-parenting meeting she meets Joseph and they go on a ‘date’ to the zoo. They get on really well and share their fertility worries but the distance between their homes could prove to be a bigger stumbling block.

Stephen and Ellen are co-parents to four-year-old twin girls Charlie and Lucy. Their extended family includes Jim and Jason, the partners of Stephen and Ellen. Ellen, Jason and the girls live in New York while Jim and Stephen are based in Norfolk. Stephen sees the girls at least six times a year and he would love to see them more. “These are two very happy girls, they’re developing brilliantly and this proves to me it’s working well,” he says.

Meet the co-parents - it is a radical new way to start a family.