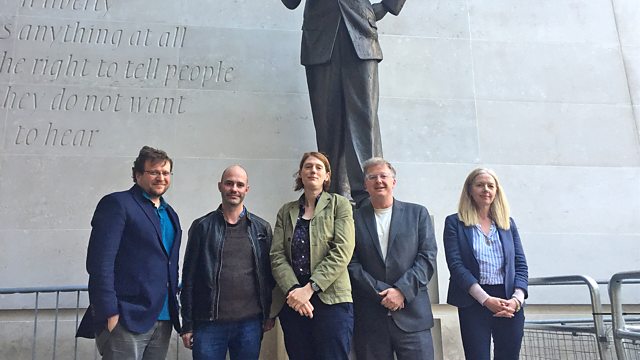 Peter Pomerantsev, Joanna Kavenna, New Generation Thinker Lisa Mullen and Dorian Lynskey join Matthew Sweet to debate George Orwell's vision of a world of surveillance, war and propaganda published in June 1949. How far does his vision of the future chime with our times and what predictions might we make of our own future ?

Dorian Lynskey has written The Ministry of Truth
Joanna Kavenna's new novel Zed - a dystopian absurdist thriller is published in early July.
Peter Pomerantsev's new book This Is NOT Propaganda: Adventures in the war against reality is published in August.
Lisa Mullen has published a book of criticism mid-century Gothic and is continuing her research on George Orwell. You can hear her Free Thinking Festival Essay about the role of Orwell's wife Eileen asking Who Wrote Animal Farm? https://www.bbc.co.uk/programmes/m000413q

Part of a week long focus Free Thinking the Future. You can find more interviews and discussions to download and catch up with on the playlist on our website
https://www.bbc.co.uk/programmes/p03zwn4d

You can find more Landmarks of Culture from 2001 Space Odyssey to Zamyatin's We in our playlist https://www.bbc.co.uk/programmes/p01jwn44

Is the Law keeping up with our changing world?