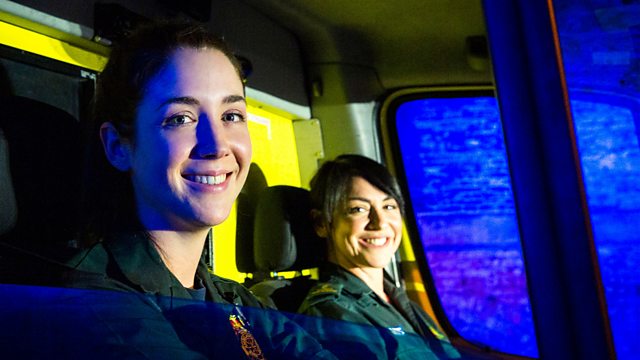 Paramedics Alice and Lauren of the North West Ambulance Service respond to an emergency call for a baby not breathing.

Senior paramedic Rich is on duty to support ambulance crews across the city centre for the 12-hour Friday night shift. As Rich scans the streets waiting for his first job he comments on the increase in homelessness in Greater Manchester. It isn’t long before Rich is called to treat his first patient, who is lying unconscious on the street because it is believed he has taken spice, otherwise known as synthetic cannabis.

An hour into the shift and the team in control take another category-one call, this time for a baby who is not breathing. As the parents are given life-saving advice over the phone, paramedics Alice and Lauren are immediately dispatched and they will be supported at scene by Rich.

Before long across Greater Manchester 48 patients are now waiting for an ambulance. The next call in progress is for an unconscious patient in the city centre. At the scene, Alice and Lauren discover that their patient is Lithuanian and they end up having to rely on a language translation app.

As the shift approaches the early hours, an emergency call is in progress from the city-centre club for a patient whose drink has allegedly been spiked. Rich is immediately dispatched to the scene.

This episode shows the humanity of the staff and crews of the ambulance service as they tackle the crisis of homelessness and the vulnerabilities of the city centre at night. It brings to life the real human stories behind the sirens.