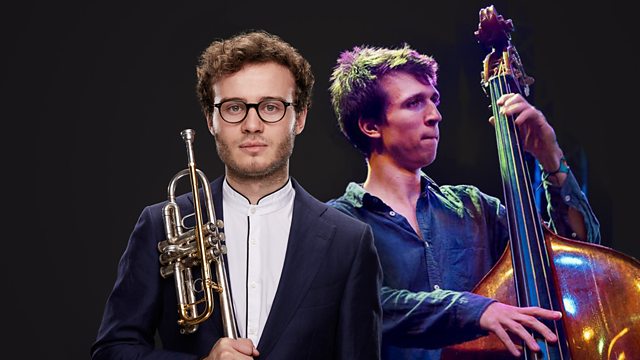 New Generation Artist Showcase: trumpeter Simon Höfele and the Misha Mullov-Abbado Group.
Georgia Mann introduces an evening of virtuoso music making recorded at the Octagon Chapel during the the Norfolk and Norwich Festival. First up, German trumpeter, Simon Höfele is surrounded by a forest of percussion instruments as he plays André Jolivet's fiendish seven-movement Heptade alongside other twentieth century classics. After that Misha Mullov-Abbado and his Group cool things down with an eclectic and zany set of works by Misha himself.

approx 8.35pm
During the interval Viktoria Mullova and Misha Mullov-Abbado play Bach in a recording they made recently at the BBC Studios.

approx 8.40pm
The Misha Mullov-Abbado Group in concert play some of Misha's own compositions including Blue Deer, Real eyes, Infamous Grouse, No Strictly Dancing, Little vision, Little Astronaut and Hair of the Bop.

Sound, nature and the seasons