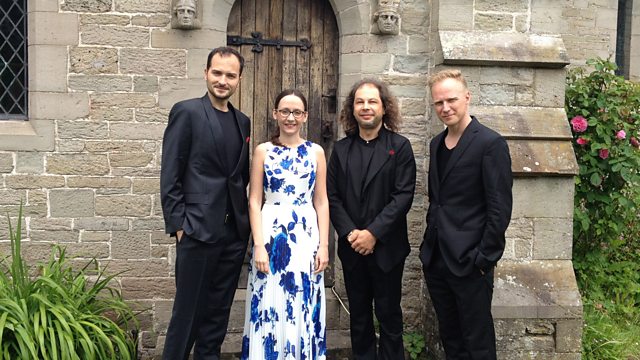 Sarah Walker presents Ravel Plus performed by the Szymanowski Quartet at the 2019 Hay Festival, including works by Ravel and Szymanowski

Sarah Walker presents Ravel Plus, with music performed by the Szymanowksi Quartet, recorded at St Mary's Church, Hay-on-Wye, during the 2019 Hay Festival. The concert comprises two works including Ravel’s ebullient Quartet in F major, which marked a turning point for Ravel as not just another salon composer, but a composer of more serious music. The final work is Szymanowski’s First String Quartet, which has a more serious tone, composed in 1917 amidst the turmoil of the October Revolution.

The 2019 Hay Festival lunchtime concert series also celebrates the 20th anniversary of Radio 3’s New Generation Artists scheme, which nurtures and promotes some of the world’s finest young musicians at the start of their international careers. Throughout the week there’ll be performances by both current and former BBC New Generation Artists.