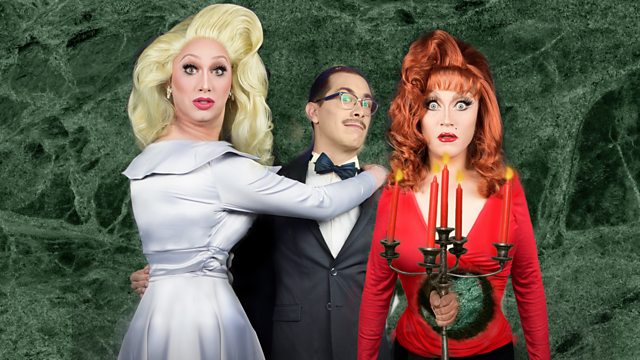 Drag Becomes Her, The moon in the arts, Restoration tragedy at the RSC

Drag Queens BendelaCreme and Jinkx Monsoon on their new show, Drag Becomes Her; how the moon has been depicted across the arts; Prasanna Puwanarajah, director of Venice Preserved.

Kirsty is joined by drag queens Jinkx Monsoon and BenDeLaCreme, two of the biggest stars of American TV show RuPaul’s Drag Race, who are on stage in London in Drag Becomes Her, a parody of Meryl Streep and Goldie Hawn’s film, Death Becomes Her.

As the 50th anniversary of the first man on the moon approaches we consider the moon’s place in culture. Artist Luke Jerram discusses his artwork Museum of the Moon which tours 7m exact replicas of the moon that are suspended high above visitors and can currently be seen at the Natural History Museum and Ely Cathedral. Critic Hannah McGill also considers how the moon is represented in film and literature more broadly.

Restoration Comedies are often staged, Restoration Tragedies, more rarely. But director Prasanna Puwanarajah has chosen for his debut with the RSC Thomas Otway’s Venice Preserved. It’s a somewhat operatic play, with speeches like arias and originally running at over four hours. Puwanarajah has taken a scalpel to it and his staging is influenced by comic books. “It’s ‘Blade Runner meets Gotham’,” he says. Puwanarajah talks to Kirsty Lang about why this play, first staged in 1682, has much to say to audiences today. He tells her, too, why he gave up being a doctor to act, write and direct, and, having worked in both kinds of theatre, the connections between medicine and drama.

Lenny Henry, Posy Simmonds, When They See Us

The moon in the arts

The Museum of the Moon
by Luke Jerram

The Museum of the Moon at the Natural History Museum

Restoration Tragedy at the RSC

Venice Preserved is at the RSC Swan Theatre, Stratford upon Avon until 7 Sept