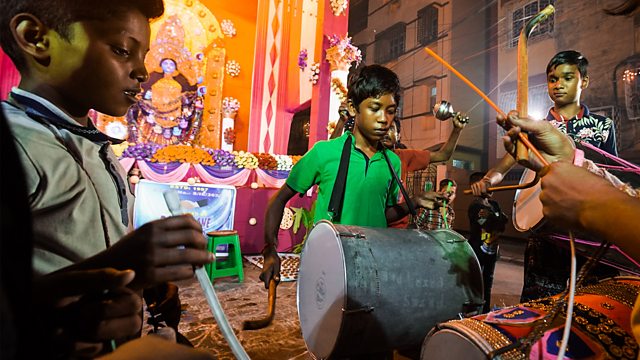 Rhythms of India Series 1
Episode 1 of 3

Music travelogue. Composer Soumik Datta begins his exploration of India in Kolkata, revealing how the country's music can help us to understand its past and its present.

Musician and composer Soumik Datta presents a musical travelogue around India. From a spectacular religious festival in Kerala to folk musicians in the deserts of Rajasthan, intimate performances on the banks of the Ganges to encounters with Delhi's hip hop superstars, Soumik takes us on an entertaining journey celebrating India’s remarkable musical diversity. Meeting and performing with folk, classical and pop musicians, he travels from the biggest cities to the most remote communities, exploring how music helps us understand India’s past and its rapidly changing present.

Soumik begins his journey in Kolkata, the city of his birth and the place where he learned to play the traditional Indian classical instrument, the sarod. Travelling from north to south, Soumik discovers how the ancient music of palaces and temples, India’s classical music, reveals two very different cultures and traditions - and tells a story of the role conquest and empire played in shaping the nation.

See all episodes from Rhythms of India

See all clips from Ancient Melodies (2)