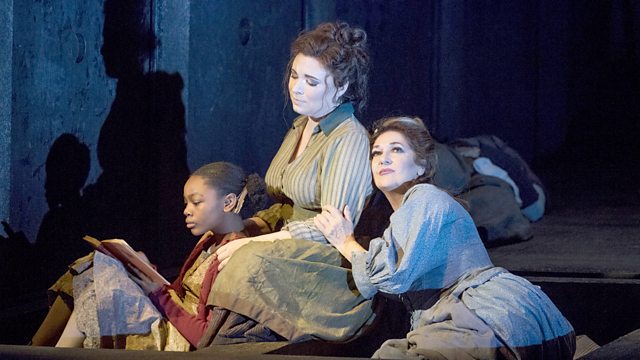 Jack the Ripper: The Women of Whitechapel

Iain Bell's Jack the Ripper: The Women of Whitechapel, from English National Opera.

Iain Bell's Jack the Ripper: The Women of Whitechapel, from English National Opera.

In Iain Bell's world premiere for English National Opera, the focus shifts from the famous Victorian serial killer to his victims - the story follows the five women whose identities have always been defined by their gruesome and mysterious deaths. The libretto by Emma Jenkins explores the struggles of these women - portrayed respectively by Natalya Romaniw, Janis Kelly, Marie McLaughlin, Susan Bullock and Lesley Garrett - within a poverty-ridden community in which it is thought that one in four women was engaged in some form of sex work simply to get by.

Tom Service presents from the London Coliseum, and is joined in the box by cultural historian Dr Fern Riddell.
Also featuring interviews with the composer, and author Hallie Rubenhold.

In the doss house, and in the street

Polly, recently thrown out by her husband, is contemplating soliciting on the street, before entering a doss house. In the doss house, women are sleeping in coffins and on the floor. Mary reads the story of Theseus and the Minotaur to her daughter Magpie. After Polly attempts to steal from the sleeping women, a fight ensues between her and Mary. Maud puts a stop to the fight and Annie reminds the women that they must not fight amongst themselves. Men begin to gather in the street. When the clock strikes four, the women set to work to sell their bodies. Mary takes a man into a separate area of the doss house, while Maud tends to a woman who needs an abortion.

The Commissioner of Police approaches Maud and asks if she is in possession of a ‘fresh parcel’. Maud confirms that she can supply what the Commissioner wants – Magpie. When Mary finds out what Maud has planned, she argues furiously with her. Out in the street, Polly, Annie and the other women gather after their morning work. Polly reflects on her life before gin. The peace of the street is interrupted by the arrival of Sergeant Strong, who has news of a brutal murder. Mary, Annie and Polly agree to go to the Pathologist’s autopsy room to identify the body. On arrival, they find the Pathologist examining the body. The women identify her as Martha Tabram, one of their own. As Mary, Polly, Annie and the other doss house women return to the street, a drunken Catherine and Liz arrive. They have earned a substantial amount of money posing for a Photographer. They offer to take everyone to the pub for a drink.

Catherine and Liz lead everyone in a drinking song before sitting down with Mary, Polly and Annie. The five women share some food before dispersing into the night. Polly, who has a new bonnet, is intent on finding a customer, but as she wanders alone through the streets, she finds herself consumed by the darkness. Magpie witnesses all from her perch above. The next evening, Mary is reading to Magpie, when a Writer arrives asking for a room. Maud demands he be given a room, while Mary ushers in the women who are seeking refuge for the night. Squibby, a young man from the knacker’s yard, brings in a sack of scraps that he has collected. The scraps are tipped out and the women eat hungrily. The Writer documents the sight. Squibby approaches Mary with a special gift for Magpie. He speaks of his love for Mary and asks her to come away with him. Suddenly, Liz and Catherine burst in with news of another murder. Polly has been butchered in the street and now Annie has gone missing. The notion of losing Annie, the mother figure of the doss house, overwhelms Mary and all the women. Hysteria and fear spread as Annie, out on the street, is consumed by the darkness.

A drunken Liz impersonates a fireman and causes a breach of the peace. In the doss house, the Writer documents his experiences with the women, while Squibby plays with Magpie. On the street, Sergeant Strong arrives and tries to restrain Liz, but in her fear and suspicion, she cuts him with a broken bottle and cries ‘murder’. Afraid, Sergeant Strong leaves her alone in the night. As the Writer leaves the doss house, Squibby voices his suspicions about him to Mary, who believes him to be a kind man. Tension in the community is at such a pitch that all men are now looked upon as potential murderers. In the Photographer’s studio Catherine is posing for him. As she works, she unwittingly stumbles upon not only the autopsy photographs of Polly and Annie but other

photographs of women being subjected to sexual violence. Believing herself to be in the very hands of the Ripper, she attacks the Photographer and flees into the street. Both she and Liz are then consumed by the darkness.

In the Coroner’s Court, Mary and the community await the verdict on the deaths of Catherine and Liz. Squibby enters with Magpie and tells Mary that he has arranged for the three of them to leave London. The Commissioner of Police arrives to oversee proceedings and Mary vaguely remembers that she has seen him somewhere before,

although she does not yet connect him with the man who had earlier tried to purchase a ‘fresh parcel’. The inquest begins and the Pathologist describes the details of the double event and offers his opinion on the nature of the killer. During the proceedings the Writer takes the stand and accuses the police of dragging their feet. The mob is roused by his words and a riot ensues in which Squibby is wrongfully identified as the killer. The mob, intent on blood and blind with fear, beat him to death. Mary and Magpie mourn over his body. As the Commissioner of Police orders the streets to be cleared and the Writer to be found and arrested, a parcel arrives. It contains a note from the Ripper and a portion of a human kidney.

The Writer, who has returned to his lodgings, writes a letter on behalf of the women of Whitechapel to Queen Victoria, begging her to intervene. In the doss house, Maud packs a small bag for Magpie whom she intends to hand over to the Commissioner of Police that evening. The  Writer sees what she is doing and begs her to stop and save the child. He even offers her money as recompense for any loss. As he does so, Sergeant Strong arrives to arrest the Writer on a charge of breach of the peace. Maud also frames him for attempting to purchase a child. He is taken away by the police just as Mary and Magpie return to the doss house. In despair and realising that everyone she has ever loved or trusted has been taken from her, she flees from Maud, taking Magpie with her. They escape to a hideout that Magpie has been using and where she has collected small trinkets and treasures. Together they fall asleep and Mary dreams of her own funeral. When she awakes, she discovers that Magpie has gone. She finds herself alone in the darkness and knows that her moment of death has arrived. In the darkness, she expresses her defiance to the unseen force. She knows she will die but will do so on her terms and with a determination that the cycle must end here and with her. She is consumed by darkness. As dawn breaks, Magpie appears alone, picks up the book of Theseus and the Minotaur and vanishes into the light. Emma Jenkins