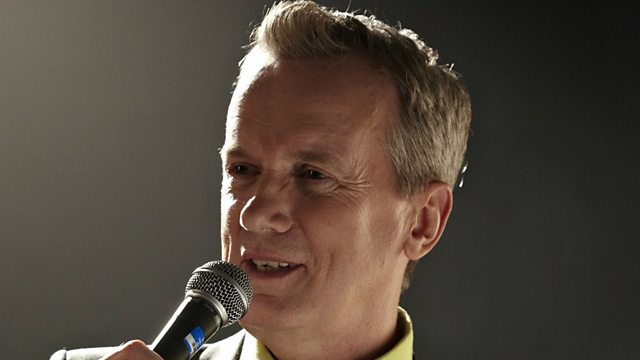 Frank Skinner discusses his new comedy tour Showbiz, George the Poet reveals why podcasts are a good medium for poetry, and should TV be responsible for highlighting issues?

Comedian Frank Skinner returns to the stand-up stage with his new tour Showbiz which he will be taking to the Edinburgh Fringe this summer where he first made his name, winning a Perrier Award in 1991. Now a radio and panel show host and co-writer of football anthem Three Lions with long time double act David Baddiel, he talks about the changing face of comedy and the thrill of improvisation.

BAFTA have analysed nearly 130,000 non-news programmes between September 2017 and September 2018, and found out that climate change featured fewer times than cats, cakes and picnics. But how much is it the responsibility of the arts to enact social change through its programming? Aaron Matthews, the head of industry sustainability at BAFTA and David Butcher of The Radio Times discuss.

Anna, a new immersive play by Ella Hickson, is a thriller set in 1968 East Berlin, a place where what you said in public and what you might admit in private needed to be rather different. The audience for this production have to wear headsets so as to experience things from the perspective of the secret service. Theatre critic Susannah Clapp reviews.

George the Poet won big at this years British Podcast Awards in a wide range of categories - fiction, arts and culture and current affairs - for his show Have You Heard George's Podcast? He talks about what he felt he could do differently in a podcast as opposed to a new poetry collection.

Anna is at the National Theatre (Dorfman) until 15 June