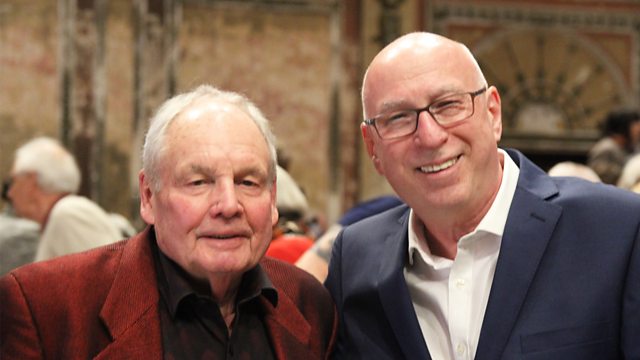 Ken Bruce presents a special concert to wish a very happy 80th birthday to one of the country’s greatest songwriters – Tony Hatch.

Join Ken Bruce as we wish a very happy 80th birthday to one of the country’s greatest songwriters – Tony Hatch.

The BBC Concert Orchestra and Capital Voices conducted by Richard Balcombe are joined by special guests Claire Sweeney, Jenna Russell, Michael Dore and Oliver Tompsett, to pay tribute to the man whose music-making career spans an incredible 70 years and whose songs provided a soundtrack of the sixties.

Close by the portals of the BBC's Broadcasting Houses stands All Souls, Langham Place and it was here that the young Tony Hatch first made his treble voice heard as head chorister. Tony left school when he was just 15 and started his career as a tea boy in London’s Tin Pan Alley – Denmark Street. He'd brew the tea and do the filing, but he was sometimes asked to play piano for visiting artists. He once played at an audition for the "BBC's Talent Selection Group" for a new band called "The Lower Third". A member of the audition panel wrote “I don’t think they’ll get better with more rehearsals” - but their lead singer did; his name was David Bowie. Tony produced a number of early tracks by Bowie for Pye records before Bowie left Pye for Philips and released "Space Oddity". Tony meanwhile went on to become one of our top producers and songwriters.

He’s worked with the likes of Chubby Checker, Pat Boone, The Searchers, Adam Faith, Sasha Distel, Matt Monro, Bruce Forsyth, Frank Sinatra and of course, Petula Clark. For Petula he wrote "Downtown" and then with the song-writing partnership of Jackie Trent there came “Don’t Sleep in the Subway”, “Colour My World”, “I Couldn’t Live Without Your Love”; “The Other Man’s Grass Is Always Greener”, "Where Are You Now?" and "Who Am I?". For Scott Walker he wrote "Joanna" and for Morecambe and Wise - "Positive Thinking".

Tony's compositions are not confined to radio. Switch on the box and you are likely to hear a Tony Hatch signature tune. He is responsible for some of our best loved television themes including “Crossroads”, “Emmerdale”, “Sportnight”, “Mr and Mrs” and “Neighbours”.

Tony's 80th birthday falls on 30th June. In this evening’s concert recorded at the Alexandra Palace Theatre – a venue steeped in television history - we’ll hear a selection of Tony’s favourite themes, songs and archive clips from his long career.

From the Cheltenham Jazz Festival

An Evening of Celtic Soul