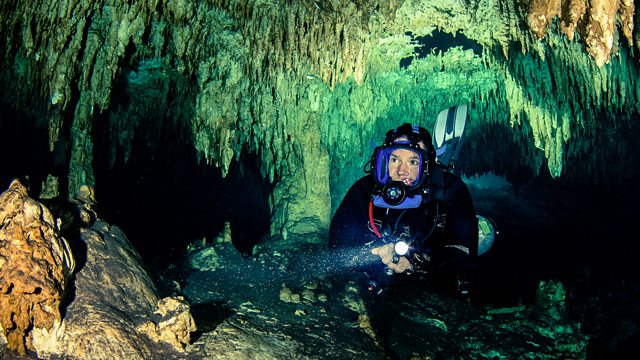 Steve Backshall leads an elite cave diving team into the largest unexplored cave network on earth. Below a Mexican jungle, they are pushing further than anyone has before.

Adventurer and naturalist Steve Backshall is on a quest to explore parts of the planet where no humans have been before.

In this episode, he leads a team of elite explorers - including world leading underwater cave explorer Robbie Schmittner, former Royal Marine Aldo Kane and diving camera operator Katy Fraser - into the wilds of the Yucatan Peninsula in Mexico. Under the vast jungle here is the largest unexplored network of caves in the world, comprising thousands of kilometres of passageways. They are stunningly beautiful but incredibly dangerous - much of the system is under water. First the team must trek through tough, scorpion-infested jungle to camp alongside a giant sinkhole in the jungle floor - a dark gateway to an underworld full of nightmarish creatures.

Going down into these narrow flooded passageways is not for the faint-hearted but, with only an estimated one percent of the caves explored, it is an opportunity for the team to write themselves into cave diving history, by pushing further in than anyone has before.

This is a challenge that tests even the most accomplished cave divers. Steve must face the terrors of being lost in an underwater silt cloud in a cave. But there is a bigger issue at stake. All life in the Yucatan depends on the fresh water in this network of caves, but it’s being contaminated by human development. With every metre the team maps, it adds to the knowledge of the system, which, in turns, helps protect it for future generations.

See all episodes from Undiscovered Worlds with Steve Backshall