BBC Two
Surgeons: At the Edge of Life
Main content 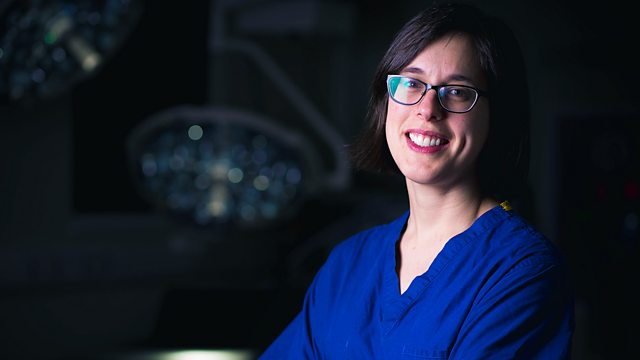 Surgeons: At the Edge of Life Series 2

A surgeon performs the most complex operation in his field: removing a woman’s oesophagus and using her own stomach to replace it. Another team tackles a hard-to-reach tumour.

At the Queen Elizabeth Hospital Birmingham, surgeons with highly specialised skills perform intricate operations that promise to be life-enhancing for their patients.

When 44-year-old AnnMarie was just a toddler, she accidentally drank bleach, which caused severe damage. She has been struggling to cope with her badly scarred oesophagus ever since. AnnMarie has trouble swallowing and visits hospital several times a year to have her oesophagus stretched. It is a highly uncomfortable procedure in which a balloon is inserted into the oesophagus and inflated.

Now AnnMarie has opted to have an oesophagectomy, even though the procedure is high risk and over 30 per cent of patients have serious post-operative complications. Her surgeon is Ewen Griffiths, one of the Queen Elizabeth’s leading consultant upper gastro-intestinal surgeons, who has spent years mastering one of the most complex and risky operations in his field: an oesophagectomy. In this three-stage procedure, the patient’s oesophagus – the 25-centimetre feeding tube, which joins the throat to the stomach - is removed and their own stomach is used to replace it. The procedure can last up to eight hours and involves three different operating sites in the neck, chest and abdomen.

Consultant colorectal surgeon Simon Radley also performs highly specialised operations in his field: complex colorectal cancer. His patient is 64-year-old retired grandmother Hazel, who has a colon tumour that has spread into her liver and abdominal wall. Without the operation Hazel will have only a few months to live, but there is an outside chance that surgery could remove the cancer entirely and cure Hazel of her disease. It is not yet clear if the cancer has advanced into other internal organs and Simon will only find out once he operates. If it has spread further, then Simon knows he will not be able to remove it entirely. But if it is confined to the bowel, liver and abdominal wall Simon believes he might just get the result Hazel and her husband Alan are pinning their hopes on.

The surgical teams need all their skill and years of experience to get the best possible results. As consultant upper GI surgeon John Whiting says, in demanding cases like these, “good enough actually isn’t good enough”.

See all episodes from Surgeons: At the Edge of Life