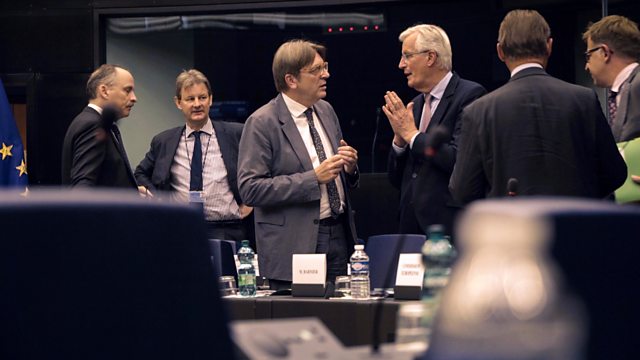 A Storyville documentary. The untold story of the Brexit negotiations... from the other side, with exclusive access to the EU parliament's representative Guy Verhofstadt.

The gripping untold story of the Brexit negotiations... from the other side. For two years, Belgian film-maker Lode Desmet has had exclusive access to the Brexit coordinator of the European parliament, Guy Verhofstadt, and his close knit team. This revelatory fly-on-the-wall film captures the off-the-record conversations and arguments of the European negotiators as they devise their strategy for dealing with the British.

Episode one watches as the Europeans’ respect for a formidable negotiating opponent turns into frustration and incredulity as the British fail to present a united front. At moments funny and tragic, it ends with the debacle in December 2017 when Theresa May flies in to Brussels to finalise details of a deal and is publically humiliated by her coalition partner, Arlene Foster of the DUP, who refuses to support the deal.