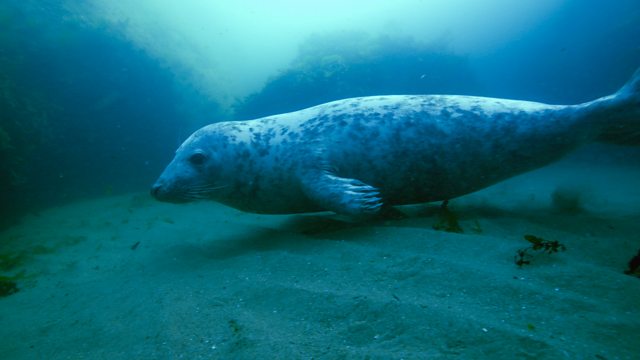 Wales: Land of the Wild Series 1
Episode 4 of 4

It is autumn, the season of change. Wildlife is on the move, and there are battles to be fought to win mates and secure the right to breed. But time is short as winter is coming.

Around half of all British breeding goshawks live in Wales, and they are thriving in woodlands across the country. In a forest in the Black Mountains in Monmouthshire, a female goshawk hunts grey squirrels in a walnut grove.

In mid-September in south Wales, the long, hot summer has produced a bounty of food including ivy flowers, which are a vital food source for a host of insects, one of which is the ivy bee. They live for only six weeks and September is the peak of their breeding season.

A mile offshore the Pembrokeshire coast is Ramsay Island where female grey seals and their pups relax in the late season sunshine. Seals spend most of their time in the water, but for a few weeks they come ashore to give birth, and Ramsay is the largest breeding colony in southern Britain.

As winter sets in, the snow-covered fields attract flocks of starlings. As the light begins to fade, it’s time to find a place to roost and they head to the coast where temperatures are milder. Small feeding flocks join together and Aberystwyth becomes the stage for the season’s greatest wild spectacle, a murmuration, 50,000 strong.

The programme also features the red kite, a species which is synonymous with Wales, but who were almost driven to extinction, with just a handful of breeding pair were left in mid-Wales in the 1990s.