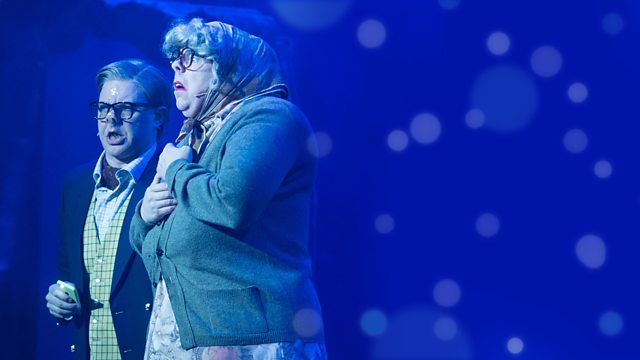 The League of Gentlemen return to the stage for their first UK tour in over 12 years with their live show, featuring all the familiar faces from Royston Vasey.

The League of Gentlemen return to the stage for their first UK tour in over 12 years with their live show, captured exclusively for the BBC. The tour features Bafta Award-winning comedy legends Reece Shearsmith, Steve Pemberton, Mark Gatiss and Jeremy Dyson bringing their deliciously dark and unhinged fictional village of Royston Vasey to theatres and arenas across the country.

The critically acclaimed black comedy, which originally ran from 1999 - 2002 on BBC Two, returned to television screens with three brand new programmes for Christmas 2017 to celebrate 20 years since the show began.

This stunning live show is captured at the Eventim Apollo in London and features the very best work from The League of Gentlemen and all the familiar faces from Royston Vasey, including Papa Lazarous, Edward and Tubbs, Pamela Doove, The Dentons, Mr Chinnery, Geoff, Mike and Brian, The Reverend Bernice Woodall, Les McQueen and of course Pauline and Mickey from the job centre.

Find out what finally happens in depths of the wife mine, how Mickey and Pauline end up sharing the same bed on stage and how the Reverend Bernice reacts to a complaint from the audience. There is also a special performance from Legz Akimbo and an ambitious new play from Ollie Plimsolls.

It is a fast-paced visual and musical feast from start to finish with spectacular sets and extraordinary special effects and the added excitement of audience participation with Herr Lipp on stage.

This is a true celebration of one of the most iconic sketch shows of all time and promises continued laughter from the moment it explodes onto our screens.

See all episodes from The League of Gentlemen