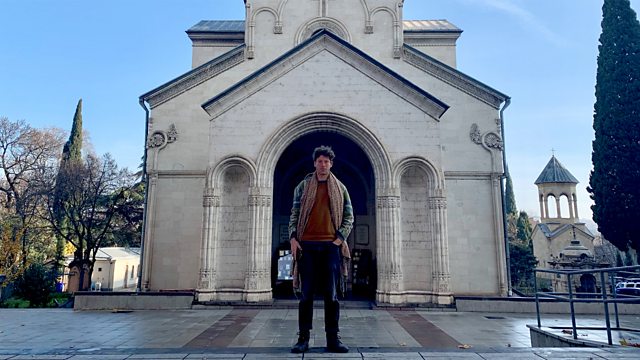 Singer and song collector Sam Lee travels to Tbilisi to explore the ancient folk songs and sacred chants of Georgia.

Singer and song collector Sam Lee travels to Tbilisi to explore the ancient polyphonic folk songs and sacred chants of Georgia. He discovers a nation where singing is in the blood.

With some of Georgia's finest singers and musicologists as his guides, Sam is introduced to the ritualistic folk songs that are said to the control the weather and even cure the sick. He is invited to a feast, high on a mountainside above Tbilisi, where he meets the Chamgelianis - a singing family from the remote region of Svaneti who are keeping the tradition of age-old pre-Christian folk songs alive.

At the beautiful Kashveti Church in the heart of Tbilisi, Sam meets singer and ethno-musicologist John Graham who introduces him to the liturgical chanting tradition. These orthodox Christian chants feature sacrosanct melodies that are said to have been passed down by God and transmitted orally over the centuries.

Bordered by powerful neighbours including Russia and Turkey, Georgia has been attacked and invaded persistently over the centuries, its traditional songs suppressed. Sam learns that, under Soviet rule, sacred chanting was banned in Georgia and chanters threatened with exile and even death. Practitioners were forced to go underground from the early 1920s.

The tradition might have died out entirely were it not for the efforts of a single monk who buried manuscripts containing the forbidden sacred songs in order to keep them safe. Many years later, following the end of the Soviet stranglehold, the buried manuscripts were rediscovered and became the backbone of a chant revival that has seen Georgian singing spread around the world.

The Age of Extinction

See all episodes from The Song Hunters