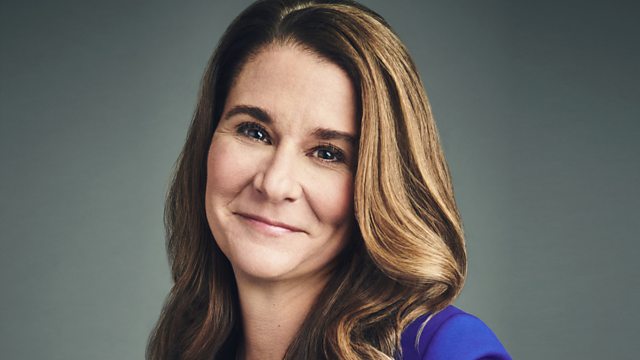 Jenni Murray talks to philanthropist Melinda Gates about her new book, The Moment of Lift.

Melinda Gates’s new book The Moment of Lift: How Empowering Women Changes the World explains that empowering women can profoundly change the way that societies function. She is, along with husband Bill Gates, the founder the world’s largest private charitable organisation and has consistently been ranked as one of the world's most powerful women by Forbes. So why has creating equality in her home life been such a struggle?

When Josie Rourke became the Artistic Director of the Donmar Warehouse she was one of the first female theatre directors to be appointed to that role. Nearly eight years later she tells Jenni why she has chosen the musical Sweet Charity as her swan song and, in terms of gender, how much the face of theatre has changed in the last ten years.

The UK government is backing a Nigerian advertising campaign urging Nigerian women and girls to find jobs at home instead of “risking a life of modern slavery” in Britain. So how bad is the problem here in the UK? Jenni is joined by Kathryn Baldacchino, Project Manager at Protect, the Anti-Trafficking Project at the British Red Cross and Kate Roberts, Head of Office at the Human Trafficking Foundation.

The World Health Organisation has advised screen time is best avoided for the first two years of life. But what evidence is there behind this advice? Jenni speaks to Sarah Jarvis, GP and Clinical Director of Patient.co.uk.