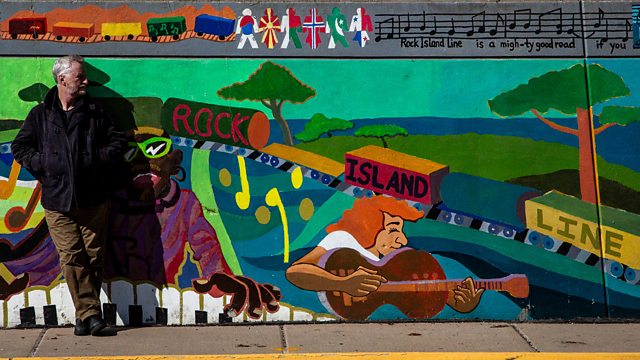 Rock Island Line: The Song That Made Britain Rock

Billy Bragg on how one song - Rock Island Line - kickstarted the skiffle craze in 50s Britain and gave birth to the great British bands of the 60s.

In January 1956, a new pop phenomenon appeared in the UK charts: a British artist playing a guitar. His name was Lonnie Donegan and the song he sang was Rock Island Line.

Donegan’s rough-and-ready style was at odds with the polished crooners who dominated the charts. He played the guitar in a way that sounded like anyone could do it. Rock Island Line sounded like nothing else on the radio and it inspired a generation of British youths to pick up guitars and begin a journey that would take them to the top of the American charts.

Rock Island Line, the biggest hit of the skiffle craze, spoke directly to a generation of British teenagers who had grown up during post-war rationing. Within 18 months of its release, sales of acoustic guitars in the UK had rocketed from 5,000 to over 250,000 a year.

The song began its life in the 1920s as a jingle in the workshops of the Rock Island Line railroad in Little Rock, Arkansas. In 1933, John A Lomax visited Cummins Prison Farm, south of Little Rock, collecting work songs for the Library of Congress. On the day of the recording, a group of eight prisoners, led by Kelly Pace, came up to Lomax’s mic and sang Rock Island Line. Lomax’s driver was the African-American musician who became the celebrated folk singer Lead Belly. He was so impressed that he learned the tune, added verses and made it a staple of his own repertoire.

In the late 1940s, young music fans in the UK began to seek out recordings from the early years of jazz, becoming obsessed with the New Orleans style (known as Trad Jazz) that favoured collective interaction over the prevailing emphasis on soloists. Blowing on their instruments very hard, they found that their lips were numb after half an hour. So as to not lose their audience, they put down their instruments and picked up guitars, a double bass and a washboard.

These ‘breakdown sessions’ were initiated by Ken Colyer, a trumpet player who sought out his heroes in New Orleans. Because he was so familiar with their recordings, he was able to sit in with them, but a white kid playing with black musicians soon drew attention and when he went to renew his visa, he was arrested and held in jail for over two months. Returning to the UK, his brother pulled together a bunch of musicians to form a band that included Chris Barber on trombone, Monty Sunshine on clarinet and, on banjo, Lonnie Donegan. Lonnie was a natural front man, with a voice that sounded American. He stood at the back with the rhythm section during the jazz numbers, but when he came to the front during the breakdown, he grabbed the audience with his renditions of Lead Belly’s most famous songs, Rock Island Line prominent among them. Asked what kind of music they were playing, they replied that it was skiffle.

Now known as Chris Barber’s Jazz Band, they secured an offer to make a record for Decca. When they gathered in the label’s studios on 13 July 1954, it became apparent that the band did not have enough material to fill an album so it was decided that they should record songs from the band’s popular skiffle breakdown. They cut an incendiary version of Rock Island Line as well as another Lead Belly standard, John Henry.

The British record industry was scrambling to find artists who might jump on the rock bandwagon, and someone at Decca remembered Lonnie Donegan. Here was a chap who looked the part - open-necked shirt, acoustic guitar, sounding like an American cowboy, singing about railroads. More importantly, his song had the word ‘rock’ in the title.

In January 1956, Rock Island Line hit the top ten and the skiffle craze was born. Donegan sent a revolutionary message to the youth of Britain: you don’t have to be a trained musician to play this music. When Lonnie toured in late 1956, he took skiffle to the masses. During his six-night stand at the Liverpool Empire, thirteen-year-old George Harrison went every night. His pal, fourteen-year-old Paul McCartney also saw Donegan and promptly asked his dad to buy him a guitar. It is not known if John Lennon saw the show, but just two weeks later he had formed his own skiffle group, The Quarrymen.

Schoolboys in their thousands picked up guitars and formed skiffle groups. The pop charts began to feature other skiffle artists, mostly following Donegan’s Rock Island Line blueprint by recording songs about the American railroad like Freight Train by Chas McDevitt and Nancy Whiskey.

The skiffle craze was short-lived, lasting barely eighteen months, but in that time it inspired a generation of British boys to pick up a guitar and play. It was DIY, self-empowering and set out to challenge the bland chart music of the day. Skiffle provided a nursery for the British invasion of the American charts in the 1960s. We have taken it for granted that British kids always played guitars and wrote their own songs. It was skiffle that put guitars into the hands of the war babies – and all of skiffle’s influence can be traced back to Rock Island Line.