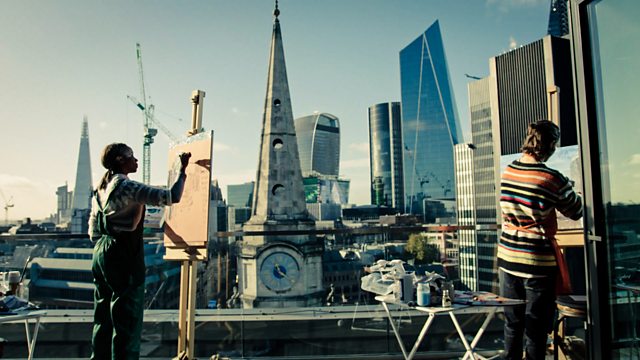 Six celebrities dabble in digital painting with a vegetable-scape and return to traditional tools to paint a spectacular London skyline.

Judges Daphne Todd OBE and Lachlan Goudie instruct our celebrity artists to dabble in the digital art world for the first task, which for some is a brand new and not entirely comfortable experience. As they abandon their beloved paint pots and canvases, the subject matter they attempt to depict digitally is a miniature landscape made of vegetables.

On hand to help are mentors Diana Ali and Pascal Anson, who break down the daunting genre by getting the celebrity artists to pair up and share a canvas so they can learn skills from each other, to prepare them for their main challenge.

Outside the artists’ studio, the celebrities return to the comfort of their traditional tools, but the challenge is supersized as they take on a magnificent London skyline. Painting a cityscape in the great outdoors pushes interior designer Laurence Llewelyn-Bowen out of his comfort zone, and actor Jane Seymour also struggles with the elements as she finds herself at the mercy of the moving sun.

And if pleasing the judges wasn’t difficult enough, comic Russell Kane joins the critique team. As a born and bred Londoner, how well does he think the artists have portrayed his home turf?

Back at base, the judges and the public pass their verdict. Who will win a place on the coveted gallery wall and the chance of a place in the final?