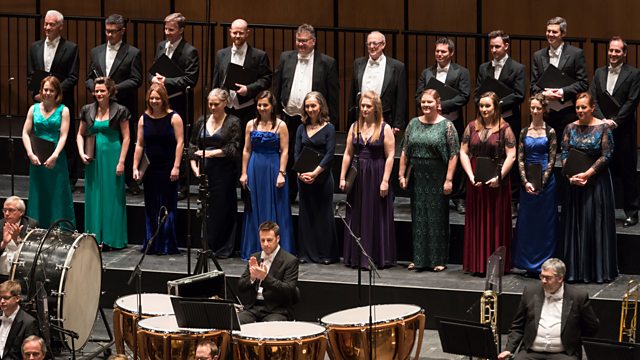 A week of concerts from BBC Proms Dubai with the BBC Symphony Orchestra and the BBC Singers. Today, an a cappella concert – which ends with a medley of Abba’s greatest hits!

This week will be featuring, among other things, concerts from the recent tour to Dubai made by the BBC Symphony Orchestra and the BBC Singers. Today we're at Dubai's Opera with a programme given by the BBC Singers, introduced there by Petroc Trelawny. First, the Singers perform Britten's Choral Dances from his opera 'Gloriana' and Duruflé's Four Motets on Gregorian Themes. Then comes a selection of popular works including Laura Mvula's Love Like a Lion. Then, the Singers are joined by the Dubai English-speaking College Chamber Choir in an arrangement of Bob Chilcott's We Are, who also arranged Billy Joel's And So It Goes, performed by the local group on their own. Next is the Singers again in songs from Flanders & Swann's 'At the drop of a Hat'. And the concert ends with Laura Mvula's Sing to the Moon, a medley of Abba's music, arranged for choir and Andrew Gold's classic Never Let Her Slip Away.
For the rest of the afternoon we're in the company of Fiona Talkington as she introduces Lighting the Fire, a work by the Estonian composer Tatjana Kozlova-Johannes, featured in the 2018 International Rostrum of Composers.
Then we move to Milton Court in London, with Dominic Dagavino performing Ligeti's Musica Ricercata for piano, part of the BBC Symphony Orchestra's 'Total Immersion' cycle.
And the afternoon ends with Richard Strauss's Sonatina No.1 in F major "From an Invalid's Workshop", with the BBC Symphony Orchestra Wind, conducted by Douglas Boyd.