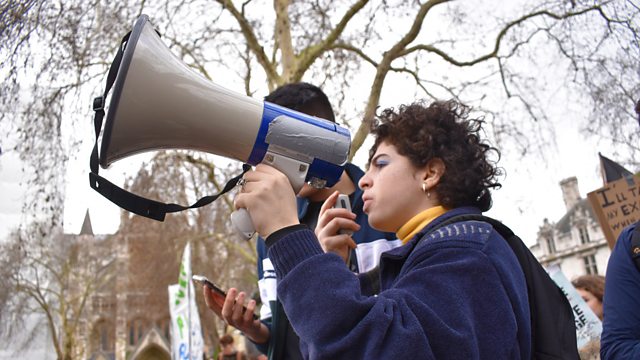 Noga Levy-Rapoport: Climate Change and Me

17-year-old Londoner Noga Levy-Rapoport records her role in organising the UK wide school strikes and charts the impact of the growing global campaign for action on climate change.

The London sixth former was inspired to act after 16-year-old Greta Thunberg began skipping classes to sit outside government buildings last September. She accused Sweden of not following the Paris Climate Agreement and her protests inspired tens of thousands of children across the globe to hold their own demonstrations.

Noga had not been intending to become a leader of UK wide protests, but the February strike UK day saw thousands of schoolchildren and young people walk out of classes and in London at least they needed some direction. As youngsters gathered on the grass she stepped forward and took charge, with protestors snaking behind her as they headed for Trafalgar Square.

Once there she was handed a microphone and started to speak, her passion and anger spilling over into an impromptu blockade of the roads as children linked arms and chanted. Her actions catapulted her centre stage in what is now a growing movement and the recordings follow her as she plans the March 15th strike day and urges parliament to tackle the escalating ecological crisis.

This is the first programme of a new series in which someone at the heart of a breaking news story takes listeners through their interactions as events unfold. In these recordings Noga discusses the preparations and the lead up to the global school strikes; the biggest environmental protest that students have organised and taken part in: “Our time to save our planet is running out; we have twelve years left before our impending environmental doom can't be stopped and we have to legislate new regulations now or we will not have a world as we know it.”

She says she feels increasingly optimistic: “it's such a powerful thing for students to come and say their piece. I'm here to make a stand, to make a difference. For me going to the first UK school strike in February was something I had to do – there was no way I could avoid it or make excuses. When I got there I knew I had to step forward and take a lead because we needed to make our voices heard.”

Organisers estimated that around 3,000 schoolchildren and young people gathered in London, with 2,000 in Oxford and smaller protests in many other cities. The March 15th strike day looks set to take place in more than 50 countries, although the Youth Strikes for Climate movement is not centrally organised, so keeping track of the fast growing number of strikers is difficult.

Noga says she will continue to organise the actions until there is climate justice: she is keen to debate her views on what could be done and takes her message to delegates attending the International Petroleum Conference in London. She speaks to her MP and liaises with those pioneering new approaches, whilst also promoting individual changes to friends and neighbours.

“I’m just a kid like any other kid, but having been in theatre for a while has given me the confidence and the leadership skills to not back down, to not hesitate when eyes are on me. And I think that was a key factor when people were asking what to do – I just had to come up with something on the spot. I got things organised and people followed me as we marched.

“There’s a massive positive reaction to the action. I think it's so inspiring and powerful to see how many people care and how many young people took to the streets. We are saying that we won't have schools to go to if we don't fix this in the next twelve years.

“For me it's a really strange concept that people know who I am. When people are relying on the next generation to be the next leaders and to lead us into a future where climate change hopefully won't have the horrible impact we think it will, then we've got to be ourselves and we've got to show who we are or people won't listen to us.”

Rachel: I Was Sectioned