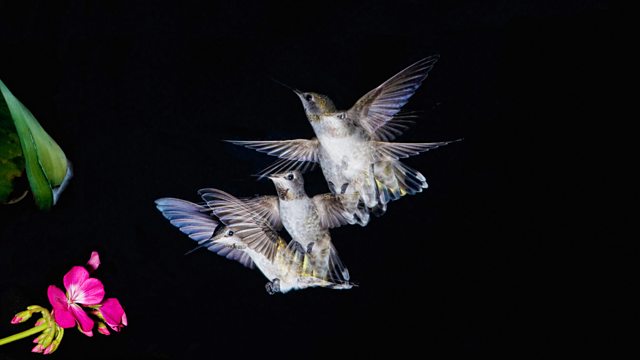 A Sense of Time

Does a second feel the same for a fly, a bird, or a swordfish, as it does for me? Geoff Marsh drills into the science of time perception within and between species.

Animal senses reveal a wealth of information that humans can't access. Birds can see in ultra violet, and some fish can 'feel' electricity. But how do different species sense time?

If you've ever tried to swat flies, you'll know that they seem to have super-powered reactions that let them escape before you can blink. Presenter Geoff Marsh asks whether flies have some sort of super-power to see the world in slow motion. Are they watching your hand come down at what might appear a leisurely pace?

Science reveals a window into the minds of different species and their temporal perceptions. Some flies have such fast vision that they can see and react to movement at four times the rate you can, and our vision works at more than six times the speed of one species of deep sea fish. This programme delves into each moment of experience to ask 'what is time, biologically?' When birds have to dodge through forests and catch flies on the wing, or when flies have to avoid birds, it would seem that a faster temporal resolution would be a huge advantage. So what is their sense of time?

Geoff meets physicist Carlo Rovelli and asks him to jump outside of physics to answer questions on biology and philosophy. Geoff explores the mind of a bat with Professor Yossi Yovel in Israel, and dissects birdsong at super slow speeds with BBC wildlife sound recordist, Chris Watson. Getting deep into the minds of animals he questions whether our seconds feel like swordfish seconds, or a beetles' or birds' or bats..?