BBC Scotland
A View from the Terrace
Main content 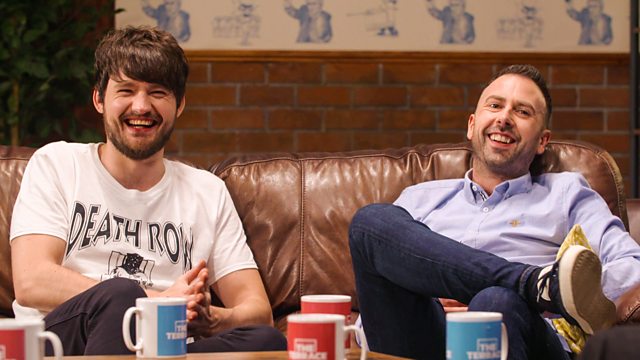 A View from the Terrace Series 1

An irreverent look at the world of Scottish football, from the top of the pile to the dogfights, the stars to the journeyman, and what it looks like from the terrace.

An irreverent, sideways look at the world of Scottish football, hosted by Craig G Telfer, Joel Sked, Shaughan Mcguigan, Craig Fowler and Robert Borthwick, as well as a revolving subs bench of real fans who are off around the country exploring the beautiful game and all its quirks and qualities.

A View from the Terrace dissects the ins and outs of the Scottish footballing week just passed, and offers analysis and opinion in its own unique way. ‘Why are they s***e now?’ sees the panel forthrightly attempt to offer reason and logic for why a team are currently taking a dip in form. ‘The Boyata Index’ has them plot the value of players on the Boyata Index, using a recent performance to value them against John Hartson’s exorbitant summer valuation of Celtic defender Dedryck Boyata of £50 million.

Looking at the action to come, the panel showcases and dissects a team that are at a crucial juncture in their season in ‘Fork in the Road’ - or in ‘Future Headlines’ they make predictions on what will happen this weekend based upon imagined newspaper headlines, Twitter hot takes and forum meltdowns.

As well as the current season, the panel also delves into our country's footballing history to make a case to enshrine a moment of Scottish football history for future generations to feast upon in 'The Time Capsule'. Or reimagine Scottish football timelines to make a case for another universe where one small moment extrapolated out would bring about a very different football landscape.

Each week, the panel are joined by social media’s Robert Borthwick, a man known for his wit and whimsy on Twitter that riles and rallies fans of every club in equal measure. He presents to the panel his favourite clips, comments, gifs and antics from the world of social media, whether from fans, players, teams or managers. If it is funny, silly or mad and it happened online, Rob will know.

As well as the studio, each week sees the show punctuated by a number of segments that ranges from observational documentaries like ‘Put A Shift In’ we send big-hearted, wide-eyed, Terrace regular and Scottish football diehard Duncan McKay to throw himself two-footed into a job around the match day to see what life is like away from the glamour of the 90 minutes. Who is inside that giant furry mascot costume? Do referees have a WhatsApp group? What is it like to be a stadium announcer or a pie seller?

See all episodes from A View from the Terrace

Eriskay Football Club: the beautiful game with views to match 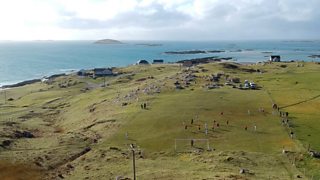 It’s wild, it’s remote and the pitch is sloped & bumpy.