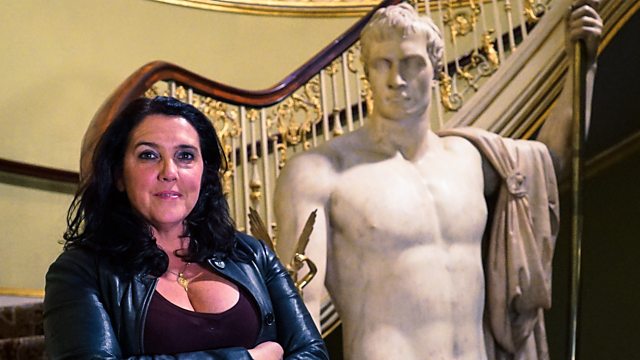 Bettany Hughes investigates the enduring relationship between warfare and worship, by following the trail of Mars, from Rome and Carthage to the present day.

Bettany Hughes investigates the enduring relationship between warfare and worship, by following the trail through time of the ancient god of war, Mars. She begins in Carthage, site of one of the most significant and bloodiest victories in the history of the Roman Empire and explores the vital role of Mars in Rome's imperial expansion.

Visiting the British Museum, Bettany sees, at first hand, the earliest known evidence of human warfare - a 13,000-year-old graveyard in which many of the bodies showed signs of violent deaths. With bodies so carefully buried, Bettany asks if ritualising and celebrating war is a way of bringing societies together – of creating 'them' and 'us'.

Back in North Africa, at the spectacular Roman amphitheatre in El Djem, Bettany examines the symbolic role of the ‘ludi martiales’, or gladiatorial games, and finds out about the challenge posed by early Christianity to this celebration of war and ritualised death. Travelling to Jordan, she then tells the story of one of the bloodiest episodes in Crusader history and examines how the Christian notion of Holy War played out in practice, with Mars still very much a presence. She then tracks how the figure of Mars was used by artists such as Botticelli and Rubens to examine the inevitability of war, and whether peace might not proffer a better option. Following the World Wars, the red scare, and contemporary conflict in the Middle East, Bettany considers how Mars’s dominion has been sustained and asks whether the benefits of war still outweigh the horrors.

See all clips from Mars Uncovered: Ancient God of War (2)