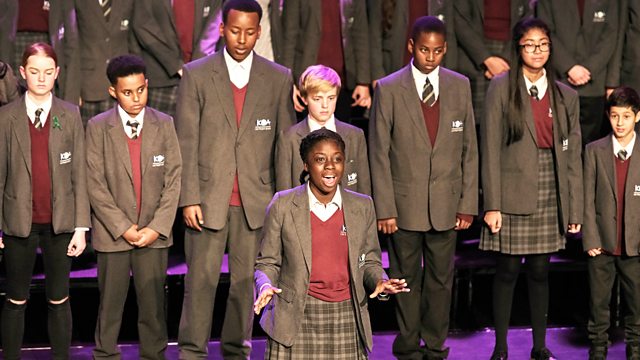 The Choir Our School by the Tower
Episode 2 of 2

In the second episode, staff and pupils are back in their building after more than a year away. The uncertainty around the return is now behind them and they focus on the concert.

‘We haven’t been there in a while, and we won’t see the faces we might have seen before. But I feel like in the end, it will be what’s best for us – to go back home.’ Maisie, aged 15

In June 2017, Kensington Aldridge Academy, the school next to Grenfell Tower had to relocate following the fire that claimed 72 lives. Five of the victims were students of the school. In this two-part series, we follow pupils of KAA as choirmaster Gareth Malone helps them create a special concert to mark the return to their original school.

In this second episode, staff and pupils are back in their building after more than a year away at a temporary site. The uncertainty around the return is now behind them and they are ready to focus their energies on the homecoming concert.

The vision is that pupils should write and perform their own musical version of KAA’s story, from its beginnings to the present day - a performance that will show their pride in the community, celebrate the courage and compassion they have shown, and look to their hopes for the future. The show is just nine weeks away and so far the kids have only one finished song. With the clock ticking, Gareth urgently needs them to start generating more material.

In the first songwriting session, Gareth is impressed with the tenacity of 15-year-old Suad, who he predicts will have an important role to play in the performance. Suad attributes her drive and ambition to the influence of her mum Rahma, who came to Britain as a teenager after fleeing the civil war in Somalia.

14-year-old Adil is another student Gareth believes has the potential to shine. Adil almost dropped out of the choir last term following the breakdown of his long-term foster placement, so Gareth wants to find a way to keep him engaged. Full of self-doubt, Adil tells Gareth he would feel most comfortable hidden away at the back of the choir but Gareth wants Adil to be front and centre – if he can get him to believe in himself.

Meanwhile, an inspirational visit from the cast of a hit West End musical gives the kids faith in the power and relevance of the story they have to tell. More pupils start coming forward to compose original songs and the school’s performing arts teachers begin working with the children on drama scenes that depict key moments in KAA’s history.

At one of the drama rehearsals, Suad and her friends Maisie and Yusra unexpectedly reveal that they have been working on something in their own time. They ask Gareth and assistant principal Mr Kavanagh if they can share the scene they have written. It explores their feelings about the morning of June 14th, and Mr Kavanagh is moved and impressed by what the girls have produced. But he is mindful of the school’s responsibilities toward the wider community and worries it might be too upsetting for some to watch. They all agree that the Grenfell tragedy must be acknowledged as part of KAA’s story, and the girls should have the opportunity to express their feelings, but the challenge is to find a way that is right for the audience and the other kids.

While the staff and kids try to decide on the most appropriate way to mark the Grenfell tragedy in their concert, Gareth focuses on the grand finale song. He hopes Adil will find the confidence to lead the choir, but there is a second solo spot that needs to be filled. At the auditions Gareth is surprised by the emergence of another hidden talent. 11-year-old Irene has been struggling with shyness since her parents separated but she is desperate for an opportunity to be heard.

Rehearsals intensify as the night of the concert approaches. There are doubts to overcome and emotional territory to navigate as the kids prepare to bring KAA’s unique and inspiring story to the stage.

Episode 1—Our School by the Tower