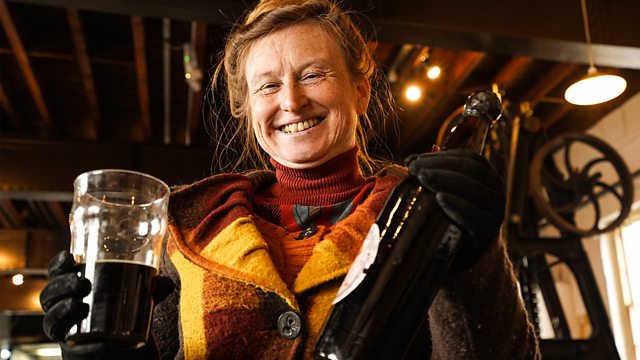 Inside the Factory Series 4

Gregg Wallace is in Burton upon Trent at Britain’s biggest brewery, where they produce 3 million pints of beer a day.

Gregg Wallace is in Burton upon Trent at Britain’s biggest brewery, where they produce 3 million pints of beer a day. He follows the production of Britain’s best-selling lager from raw barley to finished cans. Along the way he gets to grips with brewing terms like mash, wort, grist and coppers, and learns how 0.2 millilitres of yeast is enough to make 1.3 million pints alcoholic. In this high-volume factory he marvels at a machine that can fill 165 cans in just 5.5 seconds.

Meanwhile, Cherry Healey is learning how four basic ingredients – water, malted barley, hops and yeast – can be manipulated to make dark, heavy ales, light, fragrant lagers and everything in between. She is also uncovering the secrets of the perfect pint in a scientific study which shows that drinking beer from a curved glass makes it taste fruitier, while a frothy head and a higher temperature also improve flavour. Which is a win for the traditional British warm pint.

Historian Ruth Goodman is asking why Burton became the centre of brewing in Britain in the 19th century. The answer is that it is all in the water. The hard water there was perfect for brewing flavourful stouts and porters. While its position on the canal network made it ideally placed to transport finished beer round Britain and beyond. She is also finding out how beer got its stereotypically blokey reputation, despite the fact that brewing was traditionally a female profession. It is all down to the introduction of hops in the 15th century, which turned beer making from a cottage industry into an industrialised process.