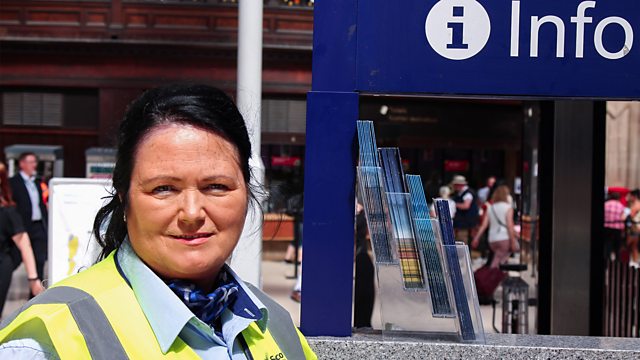 Inside Central Station Series 1
Episode 1 of 6

First in a six-part series following the staff at Glasgow Central Station. Thousands of Ed Sheeran fans push the events team to their limit as the station copes with the heat.

Documentary series following the people that work all hours to keep Scotland’s busiest train station on track, delving into the building's history with stories of the past.

Central Station has been at the heart of Glasgow for 140 years, running over 950 trains a day for 32 million passengers a year. Day and night for one long summer we meet the people who make the station work. Central Station has long been Scotland’s busiest and is the Northern terminus of the West Coast Main Line from London and the starting point for travel to hundreds of stations in mainland Britain.

Over the decades the station has knitted itself into the lives of many people. For generations of Glasgow folk, particularly those that work here, Central Station has become part of the family.

In this first episode, we meet the station ‘family’ as we follow the staff and passengers coping with the heat and some of the city’s biggest events of the summer. Thousands of Ed Sheeran fans make their way through the station over a weekend on their way to Scotland’s national stadium - Hampden - and Colette and John work hard to get the queues through in time. But will an unscheduled special train throw a spanner in the works?

Tour guide Paul delves into the history of the station’s Victorian past, telling stories of Brunel’s ‘cathedral for the iron horse’. The British Transport police deal with hundreds of teenagers on their way to the coast for some sun and recreation, while the piano gets a hammering from some customers passing through. Christine reminisces over times gone by during high tea in the Grand Central Hotel and Drew avoids the dive-bombing seagulls up on top of Central’s infamous glass roof. It’s all in a day’s work for the staff at Glasgow Central Station as they deal with delays and disgruntled customers.