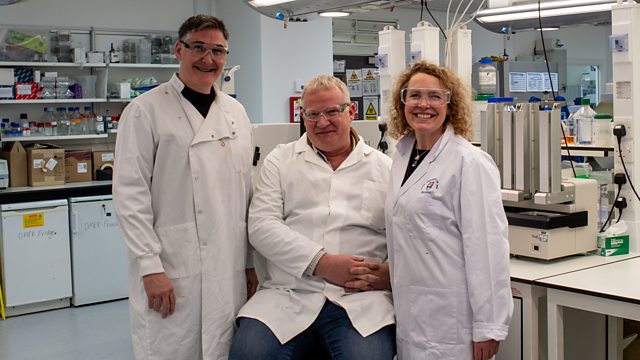 A forensic approach to street drugs

Scotland has a serious drug problem with its drug death rate, per head of population, roughly 2.5 times that of the UK as a whole. Based on the latest figures from the Scottish Government drugs deaths more than doubled in the 10 years up to 2017. In this Brainwaves Pennie Latin joins Dr Craig McKenzie, co-director of the recently formed Forensic Drug Research Group in Dundee, to find out how he's taking a fresh approach to understanding our relationship with illicit drugs. Craig explains how he's working in close collaboration with drug recovery groups and organisations like the Scottish Prison Service to better understand patterns of drug use in Scotland, particularly when it comes to polysubstance drug use where users are mixing prescription medicines with street drugs, stimulants and narcotics. He also gathers information from online sources which help him predict which new drugs might appear in Scotland in the near future, what kind of strength they'll be and what harm they might do to users.

The programme also hears from Professor Kevin Read, Head of drug metabolism and pharmacokinetics at the world-leading Drugs Discover Unit, to hear how he's collaborating with Craig so they can better understand how new drugs and combinations of drugs are metabolised by the human body. As we'll hear, Kevin's role usually involved the discovery of new medicines and pharmaceuticals, so the partnership with Craig has opened his eyes to a whole new appreciation of the complexity of the illicit drugs market and the challenges it presents for Scotland.

See all episodes from Brainwaves