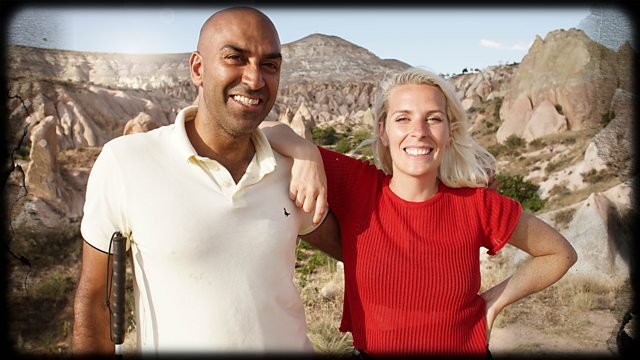 Blind traveller Amar Latif sets off to explore Turkey with the comedian Sara Pascoe as his sighted guide.

Amar Latif was told, aged four, that he would be blind by the time he was 18. However, his lack of sight hasn’t prevented him from experiencing the world. He has travelled extensively, visiting over a hundred countries and taken up skydiving, bungee jumping and skiing. Whenever Amar travels he relies on someone sighted to guide him. In return he opens their eyes and all their senses to a completely different way of travelling.

Amar is joined by comedian Sara Pascoe as he attempts to open her eyes to the potential of travelling blind and ‘seeing’ the world differently. The destination is Turkey and their journey takes them off the beaten track as they explore the country’s bustling cities, remote mountains and extra-ordinary landscapes. What becomes clear is that Sara and Amar travel in completely different ways. Sara prefers to stand back and observe while Amar needs to be in the thick of things. Their journey through Turkey becomes as much about their relationship with each other, as it is about the country.

Amar and Sara start their travels in Istanbul and as they navigate the city’s vast Grand Bazaar to get to their hotel, Sara is keen to guide them straight there but Amar just wants to smell, listen and touch every item in the bazaar. It is Sara’s first lesson in guiding - if you are blind then things need to be experienced, or else they don’t really exist.

After three days in Istanbul, Amar and Sara head east to the mountains along the Black Sea. Traditional communities still live here and have a long history of summer festivities. One of these is oil wrestling – a sport Amar has heard about but never witnessed. Sara must describe the complexities of large men in leather trousers covering themselves in olive oil and throwing each other onto the ground and she rises to the challenge.

Their time in the mountains also gives Amar and Sara time to understand each other better. Amar opens up of how he went blind, and the impact it had one his teenage life. By 18, he had lost his sight completely and found himself trapped in darkness, just as his friends were getting girlfriends and exploring the world. Amar overcame his depression by deciding to say yes to everything and becoming an immensely positive person.

However, after 25 years of blindness, Amar is now beginning to forget what things look like. Images that were once familiar in his imagination - clouds, birds, his mother’s face - are fading. Sara is deeply affected by this and decides to take Amar to a place that is unlike anywhere he has been before. And she plans to describe it so well that it creates a new visual palate in his imagination. They head to Cappadocia, a unique landscape formed from volcanic mud that has been eroded to create staggering rock formations. For 24 hours, Sara describes the scene in forensic detail to the extent that Amar can picture it in his mind and ‘see again’. By the end of their transformational journey they have both learnt a huge amount from each other and how we interact with the world around us.

See all clips from Travelling Blind (3)